[UPDATE]: For those of you with the computer processing power to view it, I’ve added a 1080p version of the video to blow your eyeballs out. After watching it myself, I almost had to dial an ambulance… mikechi.

Apparently Yoo Youngjin’s “Beautiful Girls” music video, shown during the girls’ “Into The New World” solo concerts, has dropped. (However, it has not yet been confirmed whether or not the music video is official because the music video has not been uploaded on SM Entertainment’s official YouTube account — Sment)

END_OF_DOCUMENT_TOKEN_TO_BE_REPLACED

Another year, another milestone achievement as SNSD achieves mammoth sales in Korea and Japan.

Hanteo, a Korean based record sales research site, recently revealed that SNSD has sold over 300,000 copies of their released albums in this year alone. This makes them the first idol group in over two years to achieve such a feat, the last being DBSK in 2008 with their album “Spell – Mirotic”. END_OF_DOCUMENT_TOKEN_TO_BE_REPLACED 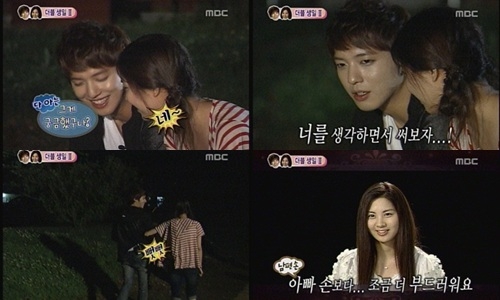 A new “We Got Married” episode was aired earlier today and in the episode, Seohyun’s hubby a.k.a C.N Blue’s leader, Jung Yonghwa, confessed something while the two were on a date—fishing. When Seohyun asked about the lyrics of one of C.N Blue’s song, “Love Light”, Yonghwa disclosed that while he was writing the lyrics of one of C.N Blue’s song, titled “Love Light” (which is the 5th track in C.N Blue’s mini album “Blue Love”, released earlier in May this year), he was thinking Seohyun, his wife.

END_OF_DOCUMENT_TOKEN_TO_BE_REPLACED

Random post, but not really. On the latest episode of the Korean drama, “I am Legend,” staring Kim Jung Eun (many of you guys might know her as being the MC/host of Kim Jung Eun’s Chocolate music show), Kim Jung Eun along with her “ahjumma” band covered the rock version of SNSD’s “Genie”/”Tell Me Your Wish.”

END_OF_DOCUMENT_TOKEN_TO_BE_REPLACED

Undeniably, the girls’ 1st showcase concert (<–click for pictures and fancams) in Japan was a total success. According to various Japanese news articles and Soshified, SNSD, “the K-POP girl group with great legs” (as the articles put it) held their showcase concert at Tokyo’s Ariake Coliseum on the 25th with thousands of fans in the audience. As you may know, those fans received invitations to attend the showcase with the girls’ First Press Limited Edition DVD, “New Beginning of Girls’ Generation” and it was said that an estimation of 22,000 fans would be attending the girls’ showcase. However,  about 7,000 fans were at the first showcase. Apparently, the sex ratio at the concert was 80% and 20% male.

At the 1st showcase, the girls performed 5 songs (Genie, Oh, Run Devil Run, Into the New World, and Gee). Fans were said to burst into cheers when the members did something with just the slightest effort. Sooyoung, at one point END_OF_DOCUMENT_TOKEN_TO_BE_REPLACED

Soshi fans in Japan are getting real lucky as SNSD’s “Gee” and “Genie” are being made into ringtones and are going to be distributed to the Japanese market! I’m so jealous! Imagine these songs playing everywhere in Japan on mobile phones !

END_OF_DOCUMENT_TOKEN_TO_BE_REPLACED

The team have been rather slow on updates due to our busy lives,so pardon us for that.
But anyway i’m here to make it up for you guys! Pull yourselves through as you read through this long post.

First and foremost,92 netizens were caught uploading nude photos of our girls. Before you lose control,grab hold of yourselves,as these photos AREN’T REAL. They were photoshopped in such a way that the girls’ faces are superimposed onto other naked women. Good riddance,and guess what? 72 of them are actually underaged and they already have such dirty minds. By the order of law,they should have been sent to jail.

END_OF_DOCUMENT_TOKEN_TO_BE_REPLACED

A picture of the girls have recently surfaced on the net. In the picture, the girls are seen with stunning shades 3D glasses as they crowd together in front of a screen along with staffs. Many people speculate that this picture was taken at the scene where the girls were/are filming the remake of their “Genie”/”Tell Me Your Wish” music video for their upcoming debut in Japan.

The 3D glasses makes people believe that the remake might possibly be in 3D or at least there might be a 3D version. If you recall, there were rumors before about James Cameron, the director of the 3D movie, “Avatar,” speaking with SME and having plans to work on SNSD’s music videos and concert for Samsung. Regardless, nothing is confirmed yet and maybe Cameron has nothing to do with what is believed to be the “remake.” It is quite exciting though to think about. If there does happen to be a remake of “Genie”/”Tell Me Your Wish” in 3D, I’m ready; still have my 3D glasses from watching “Despicable Me” in 3D (;

We hear a very familiar voice all the way from Japan…which is  from our lovely Sooyoung! Sooyoung simply presented herself in a cute video for soshi fans, updating her latest status over there (and also shows her gorgeous smile :)) . With her continuous enthusiasm and positive attitude, Sooyoung seems to be having bucket loads of fun!

Sooyoung’s appearance on the video has brought many fans to the attention that she somehow looks different – her style has changed to slightly longer hair and different make-up styles, but she still looks so beautiful!

Some fans have also realised that Sooyoung’s clothes in the video may contribute more evidence towards  SNSD’s predicted Japanese version of Tell Me Your Wish. Sooyoung wore a dark-ocean blue suit outside a white blouse, which was perfectly matched with a neatly-done tie. This style of clothing can be closely related to the ones shown for the TMYW promotions. Check it out yourselves below.