Check out the girls new Japanese single Galaxy Supernova!  This one will be released on September 18!

SNSD are often referred to these days as ‘dae-sunbae (awesome seniors)’ by younger groups, which makes ShinHwa dae-dae-sunbaes. Having recently wrapped up promotions for their 11th studio album, first generation idol group have been proving that they still got it, recently doing a concert tour. A couple SNSD members made sure to attend the grand finale show, giving some support to the legendary group.

The chuckles heard in the video were apparently Yuri, as photos were also released of the two members visiting M a.k.a Minwoo backstage END_OF_DOCUMENT_TOKEN_TO_BE_REPLACED

On this day in 1989, a baby was brought into the world that would grow up to be a a pink-lover, a dedicated worker, a passionate artist and a fantastic baseball pitcher. This baby was of course, Hwang Miyoung a.k.a Stephanie ‘Young’ Hwang. END_OF_DOCUMENT_TOKEN_TO_BE_REPLACED

August-birthday-girl Tiffany was chosen as CeCi magazine’s covergirl for their August issue. Below is the cover-story shoot, wherein Tiffany is a stunning homeless woman who is living out of a garden and therefore spends all her time around plants. I’m kidding, I think they just thought ‘pretty girl. flowers. originality.’ And that was that. Theme aside, babycakes looks absolutely drop-dead and let’s just allow ourselves to be healed by her beauty. 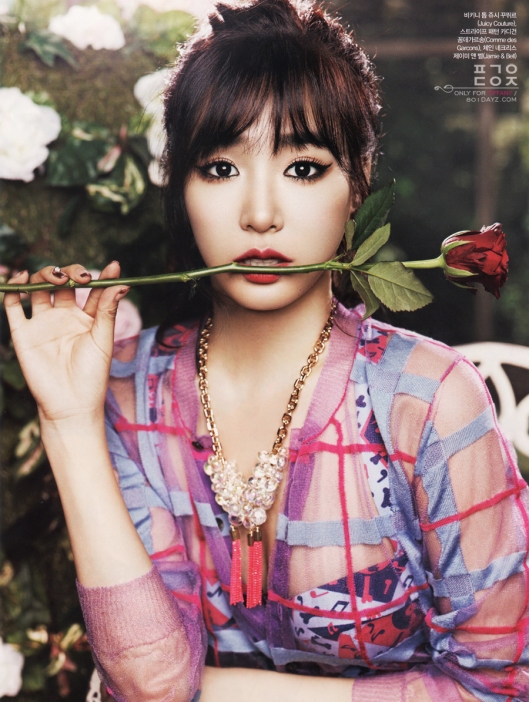 END_OF_DOCUMENT_TOKEN_TO_BE_REPLACED

SNSD graces the pages of Campus 10‘s 13th issue, with the magazine featuring some of SNSD’s Baby-G promotional material. The photos themselves are not exactly new and can already be seen in earlier Casio advertisements featuring the girls, but it never hurts to look again and reminisce about when Sunny‘s hair looked edible. 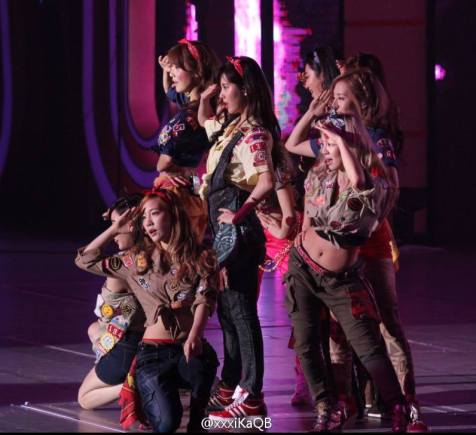 On the 28th, SNSD as well as a myriad of other groups performed at the “Korea-China Friendship Concert” (aww, ain’t that a cute name?), to celebrate relations between the two countries. Yoona also was an MC for the event alongside Kyuhyun of Super Junior and Taecyeon of 2PM.

The artists in attendance also had the opportunity to meet Park Geun-Hye, the President of South Korea (hodayum), and the current holder of Seohyun‘s future occupation. She just happened to be in China and was like “ohei let’s meetup yo”. 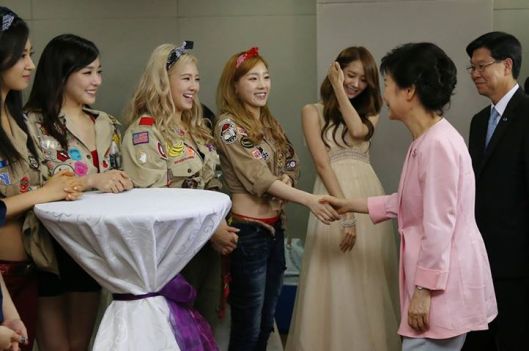 SNSD recently flew to Singapore to attend the Asia Style Collection, where they were invited to perform alongside several Asian pop-stars including fellow j-poppers AKB48 and k-poppers 2NE1. Singaporeans have recently been suffering from dangerous levels of smog caused by fires in neighbouring Indonesia. Thankfully, the haze lifted a little bit during SNSD’s visit (or because of SNSD’s visit!? …#goddesspowers) and the girls (minus one Choi Shikshin) pulled off a fun show despite the bad air.

Photos by jotothel/Kaption: a k-pop photo blog (hit them up for more photos of the event, give ’em some love ;D)

I was putting together some data on SNSD’s sales so far in 2013 since we passed the half-year mark a while ago, but I realised that some fans might not understand the true meaning of the data in terms of what it really means for SNSD. So I’ve ended up with a chunk of text about SNSD’s 2013 performance thus far, how it compares to their previous years, as well as some background info on how the Korean entertainment industry works. This might be a boring read for some of you…sorry!

END_OF_DOCUMENT_TOKEN_TO_BE_REPLACED

There are hundreds of thousands, even millions of SNSD fans in the world, and many of us have never seen an SNSD concert. ;_; But no matter, for such unfortunate souls, there are awesome Japanese stations such as WOWOW who are kind enough to broadcast (almost) full footage of one of SNSD’s Girls&Peace Japan concerts! A blessing from the heavens. *^*