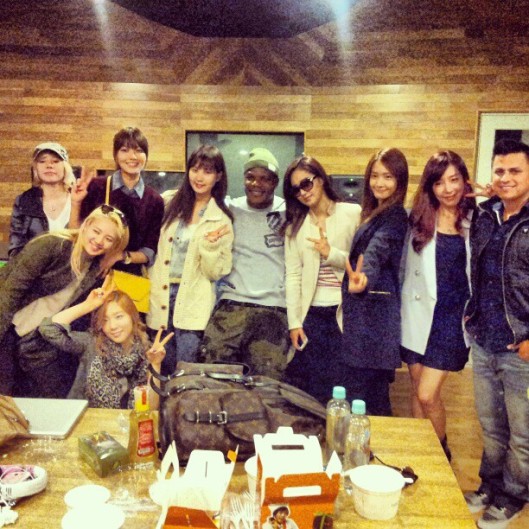 From inside the studio, this picture of SNSD was taken with American singer, songwriter and producer Sean Garret (middle) and music producer, songwriter and composer Ricky Luna.  From Luna’s instagram, he said, “With Girls’ Generation Seoul Studio. We are working together on an album.”

Hmmm…could this finally be the full English US album they’ve been talking about since forever ago?  For those of you who don’t know, Garret works for Interscope Records, the girls US record label.  Let’s hope so!  I’ve been waiting for this one!

Finally some information has been released regarding Girls’ Generation’s 4th album! Perhaps this won’t make your wait any less painful, but hey, some update about the comeback is better than none, right?

END_OF_DOCUMENT_TOKEN_TO_BE_REPLACED

+ Updated with voting information – As the GDA voting page is entirely in Korean, Soshified has very kindly created a translated voting guide. So what are you waiting for? GOGOGOGOGOGO!!! <- link to information page

It’s been announced for the 26th annual Golden Disk Awards (Korean Grammy Awards) SNSD has been nominated in three categories which include: Album of the Year, Digital Album of the Year and Most Popular Artist of the Year.  The awards committee selects the winners based on sales figures throughout the year from January 1, 2011 to November 30, 2011, along with other various criteria.

END_OF_DOCUMENT_TOKEN_TO_BE_REPLACED

Just like how there were teasers of the girls’ Into the New World ‘The 1st Asia Tour’ Live Album, teasers of Jessica’s ‘Almost’ and TaeNy’s ‘Lady Marmalade’ studio versions have surfaced. Could it be that SM will release the girls’ Japan Arena Tour Live Album soon?

END_OF_DOCUMENT_TOKEN_TO_BE_REPLACED

SNSD‘s first Japanese album, Girls’ Generation, debuts at #3 on the weekly album chart of United World Chart. The United World Chart is a worldwide chart issued every week by Media Traffic, using both sales (digital and physical) and airplay to determine the most popular albums and singles worldwide.

The girls’ first Japanese album debuts as the third top-selling album in week 24 of 2011, behind Lady Gaga‘s Born This Way and Adele‘s 21.

END_OF_DOCUMENT_TOKEN_TO_BE_REPLACED

Shortly after Hoot promotions, year-end shows, television show appearances, etc. there’s more in store for the girls. Starting off the new year with a bang, SNSD will be working in both Korea and Japan to prepare for performances and record a new song!

According to an SM Entertainment representative, END_OF_DOCUMENT_TOKEN_TO_BE_REPLACED

In addition to their Sports Korea win, SNSD nabbed yet another award- the 2nd spot on the prestigious Oricon Weekly Album Chart!

Recently, we reported that “Hoot” ranked #2 on the Oricon Daily Album Chart, with 21,271 copies sold by the day after the album dropped. Also, the Japanese version of “Gee” had reached the 2nd spot as well, but as Oricon stated: “This is SNSD‘s first Top 10 entry on the Album Chart”. On December 28, the Japanese Edition of the 3rd Mini Album “Hoot” sold 61,000 copies in the first week- an impressive feat for a relatively new group.

The Japanese edition of the mini album ‘Hoot’ consists of SNSD’s hits such as ‘Tell Me Your Wish’, ‘Gee’, ‘Run Devil Run’, ‘Oh!’, etc.

WE’RE EXCITED, AND YOU SHOULD BE TOO!