3 consecutive hit songs- “Oh!”, “Run Devil Run”, and “Hoot”- topped off yet another successful year for the girls both at home and internationally. Ever since their debut showcase held at Ariake Colosseum this past August, the girls have quickly become a household name in Japan, gaining a whole new sector of fans. 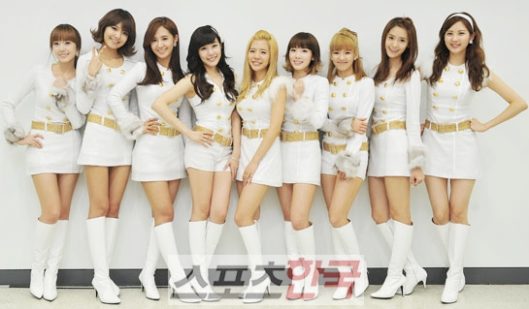 Despite their huge success worldwide, SNSD were surprised at receiving the two titles on December 25th. In the waiting room at Ilsan, Gyeonggi-do, the girls showed their honest reactions to the newly added awards under their belts:

Reporter: You are the ‘Star of The Year’ award winner. How do you feel?
Jessica: Yeah~!
Seohyun: I could not believe it.
Sunny: As we are still young girls, this means a lot to us and it seems surreal.

Reporter: This year SNSD have been receiving lots of love. What do you think is the factor for your popularity?
Taeyeon: I think the audiences love the ‘freshness’ of our performances everytime we come up with a new concept. Also, the expectation that goes with the change in our appearances played a major role as well.
Seohyun: Since we’re growing slowly everyday, please feel proud for us. I guess when the audience see us being happy on stage, they too, will be feeling the same.

Reporter: It has been a busy year. What’s the most memorable moment?
Jessica: Our first showcase in Japan was the most memorable.
Taeyeon: That’s right. The feeling is still fresh in our minds. When we first landed on a foreign land, how would we know that the fans know about us and gave us such huge cheers and support? Even now, I still find it hard to believe.
Seohyun: In achieving new records in a new place, it has given the team members an opportunity to work together more closely.
Sooyoung: I think for me it’s Tiffany’s injury. This is the first time a member has been absent for this long due to something like this. With the void left by Tiffany, I think we have learned to care and think of one another better now.
Tiffany: I’m really thankful for the care and concerns given by the members. The void was greatly felt. In the future, I do not want to get hurt or ill anymore.

Reporter: What are your plans for 2011?
Seohyun: This year, we had the ‘Asia Tour’ going. Whenever we meet fans abroad, there is a special kind of feeling which is quite different from what we received from fans in Korea. In order to meet more of our foreign fans, we want a world tour. As proud citizens, SNSD want to help promote Korea Republic as well.
Taeyeon: I only want to greet everyone with good news. Please keep SNSD in your minds in 2011 too.