SNSD’s Sooyoung and Yuri were guests on the most recent episode of Gag Concert which aired earlier tonight. Now we already know that when SooRi get together hilarity is bound to ensue… END_OF_DOCUMENT_TOKEN_TO_BE_REPLACED 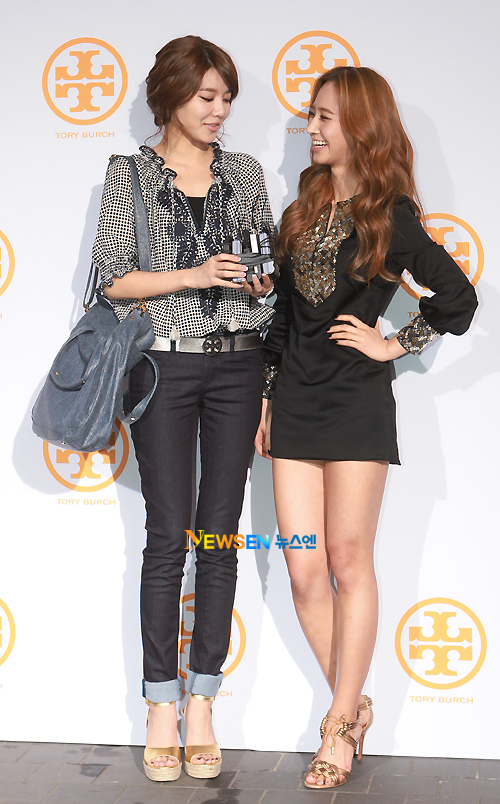 Known as one of America’s best fashionistas, Tory Burch launched her self-titled brand in 2004, offering consumers a variety of apparel, shoes, handbags and accessories.

Sooyoung and Yuri were dressed in attire from Tory Burch’s own collection, and I must say, looked absolutely captivating! I hope they had a good time (together) and let’s hope to see more of this pair interacting with each other more often in the future…

Hit the jump for media from the event.

END_OF_DOCUMENT_TOKEN_TO_BE_REPLACED

Edit: JEyon: I found a song that doesn’t have “I love you” in it :p

Well they’re coming back!  Damn, if I were SooYoung, I might’ve END_OF_DOCUMENT_TOKEN_TO_BE_REPLACED

Both Seohyun and Yuri have all passed the last exams for the 2010 admittance to DongGuk University. They managed to get a place in the 2010 intake for the acting major despite the 10.67:1 ratio for that course. Congrats girls! 😀

It was reported earlier that Yuri had scored a place in the theater department in ChungAng University, which is Sooyoung’s school. Yuri haven’t decide whether to go to ChungAng or DongGuk. Just in case you forget, Yoona is attending DongGuk University.

Oh boy, it seems like Yuri has to choose between Sooyoung and Yoona (+ their Seobaby)…
It must be one tough decision to make. Even I can’t decide which one I ship more, the gag couple SooRi or the triplets SeoYoonYul.

Get ready for the next Vanessa Hudgens and Rihanna… collabo version! Oh yeah behbeh.

I don’t know what did it, but somehow Cindy, in the middle of our Greys Anatomy and Three Rivers conversation, connected it to wanting more SooRi…  I guess they couldn’t afford Yoona in this production; you know how expensive she is.

But man, I never knew Soo was into bondage… And man, she likes to shove. Like I’ve always said, Soo >>likes it rough!<<

END_OF_DOCUMENT_TOKEN_TO_BE_REPLACED

You know how last week, I said I’d be so busy with meetings that I’d be the last person to see Wednesday’s showcase and videos? Then it turned out nothing good even came out for almost the entire day yesterday! But because I was so tired, I went to sleep before 12 for once and I actually missed the MV release by 20 minutes D:  When my sister told me that at breakfast, she even had the nerve to tell me she came in my room, saw me sleeping, and laughed instead of waking me up. That bastard child ;_;

You know how last week, I said I’d be so busy with meetings that I’d be the last person to see Wednesday’s showcase and videos? Then it turned out nothing good even came out for almost the entire day yesterday! But because I was so tired, I went to sleep before 12 for once and I actually missed the MV release by 20 minutes D:
I don’t know what I feel about the song… it’s somewhat repetative but

END_OF_DOCUMENT_TOKEN_TO_BE_REPLACED

I find it funny that Yuri is teaching Jun Hyunmoo this song. Maybe he needed some help >>picking things up<< with such a catchy song?

END_OF_DOCUMENT_TOKEN_TO_BE_REPLACED

You guys must be tired of my JeNy might miss my JeNy, but it’s time to rep SooRi, 2/3 of  YoSooRi, just because it’s time to switch things up a bit. This is for you, Boss Lady! I’m doing what you wanted me to do :p happy now? Have a safe trip, Cindy! Don’t miss me us too much. The staff will take care of the site, just have fun haha.

END_OF_DOCUMENT_TOKEN_TO_BE_REPLACED

All this time, you’ve seen me post all things JeNy when it comes to couples. Well, now it’s your turn.