baby taeyeon + panties = shenanigans, dance, i love you, korean fan girls, LOL LAAV HER!, loltaeyeon, loltags, mama dance?!, mamataeng, sleeptalking taeyeon, tae was still a dork even when she was a kid, WGM

Here is the continuation to the first part of the interview with MAMATAENG, make sure you do some ab/mouth stretches before you continue reading because your stomach will hurt from laughing and smiling too much.

END_OF_DOCUMENT_TOKEN_TO_BE_REPLACED

A couple of BTS photos as well as a making film from the latest Domino‘s CF has been released hot from the oven.
Check them out under the cut.

END_OF_DOCUMENT_TOKEN_TO_BE_REPLACED

Tiffany might hate bugs but she’ll be thankful for these! 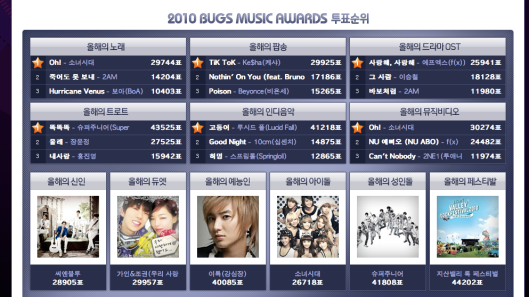 From November 23rd to December 13th, online musical portal Bugs! conducted their online 2010 Bugs! Music Awards. The results were based entirely off of netizens’ votes and you can bet SNSD took home some awards.

There was a total of 12 categories including “Song”, “Pop Song”, “Drama OST”, and so on and so forth. 110,000 Bugs! members participated in the voting event leading to Soshi win in three categories. . The awards included Song of the Year, Music Video of the Year, and Idol of the Year. The biggest win was definitely from Song of the Year, with a total of 29,744 votes, basically doubling runner up 2AM’s votes.