Most of you K-drama lovers out there would already know about the new drama, Paradise Ranch, starring SNSD‘s sunbae, Changmin from TVXQ. With maknae already featuring in the OST, SONEs now have another reason to love the drama as Soshi‘s very own Sooyoung has made a cameo appearance! *applause*

Sooyoung appeared as the secretary for Han Dongjoo’s (played by Changmin) father, Han Taeman and the latter asked her to check for spelling errors on something that he had written.

Yes! At least according to “Death Note” Director, Shusuke Kaneko. Kaneko tweeted on January 25th: “Although I’m saying this while I’m drunk, SNSD is the best idol group in the past 50 years (among singers)”. LOL! They say people are honest when they’re drunk. Obviously they’re right 😀 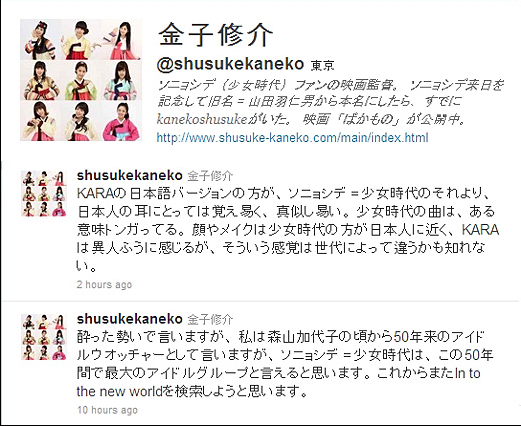 All my biases aside, this wasn’t Kaneko’s first mention about SNSD. Last year, after SNSD’s Tokyo showcase, he wrote, “I was stunned by SNSD’s stage performance. They were overflowing with charm on stage.” On January 19th, he tweeted, “I managed to watch the full version PV for SNSD’s new song ‘Visual Dream’. It’s advanced. Aren’t they going to release a Japanese version PV for ‘Run Devil Run’?”

Lucky for the famous director, SM did release a Japanese version of the hit single. Even before then, Kaneko had been using as his Twitter avatar a picture of the girls in Hanboks (now it’s a picture of the girls during “Honey” promos), and described himself as a “SNSD fan, Film Director”, clearly showing his love for Soshi.

About a week ago, YoonTae were spotted out and about, doing what the girls’ do best on their days off… SHOP! END_OF_DOCUMENT_TOKEN_TO_BE_REPLACED

SNSD, TVXQ, and KARA all make up the Super Hallyu Trifecta, constantly showcasing their ability to succeed outside Korea. Once again proving international appeal, the three secured 5 spots on Japan’s iTunes Top 10 Singles Chart. Can I get a WOOT WOOOT! Or a Hoot Hoot Hoooot!

END_OF_DOCUMENT_TOKEN_TO_BE_REPLACED

A new subbed YongSeo cut of We Got Married has just been released! Following on from last week, the couple’s ‘adventure in Busan’ continues. 🙂 Get ready for more “naaawwwww” worthy moments and be sure not to spazz too much. ^_^

END_OF_DOCUMENT_TOKEN_TO_BE_REPLACED

With their recent big win at the Seoul Music Awards on the 20th, the award that SNSD won the following day sort of fell under the radar. But hey, any award that the girl’s win is definitely worth covering (and because it is our duty to do so :)), especially when they make an ABSOLUTELY STUNNING appearance at the ceremony.

Hit the jump to see what I’m talking about but be forewarned, the following post is PICTURE HEAVY! END_OF_DOCUMENT_TOKEN_TO_BE_REPLACED

…Naw I’m just kidding with you. XD I’m fairly sure Run Devil Run will remain a digital single to be released on Shoujo Jidai‘s full japanese album when (if ever) it comes out. There is however, one epic fan-made music video that I thought would be fun to share with you, made by the talented Synkroneyes.

END_OF_DOCUMENT_TOKEN_TO_BE_REPLACED

+ Added another cut, the ‘bubble cut’

Though Tiffany recorded this ‘Star King’ episode two/three weeks ago, it was just aired earlier today and I must say that she looks friggin gorgeous in this episode. 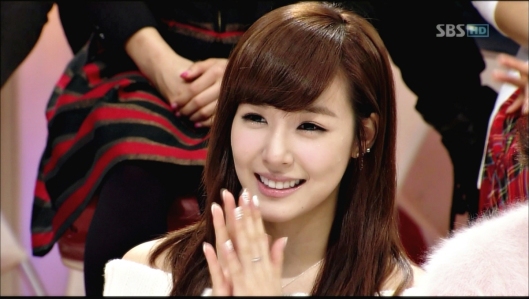 END_OF_DOCUMENT_TOKEN_TO_BE_REPLACED

Fans who are craving for some new Taengoo duets are in luck! The second it hits January 31st (aka midnight), Taeyeon and Kim Bumsoo’s duet, Different, will be released to the public! Let’s start the countdown guys!

Different will be the first song to be unveiled from Bumsoo’s seventh album, Solista:Part 2 (the full album will be released in April). Bumsoo has expressed his pleasure in working with and singing with the little leader of SNSD, stating that Taeyeon has always been one of his favorites!