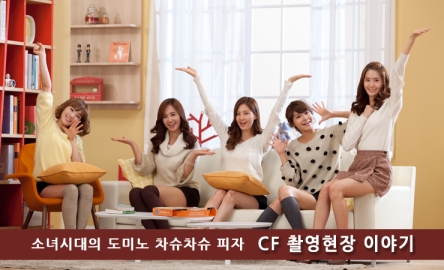 A couple of BTS photos as well as a making film from the latest Domino‘s CF has been released hot from the oven.
Check them out under the cut.

END_OF_DOCUMENT_TOKEN_TO_BE_REPLACED

Seohyun missed the fanmeet to film WGM at Youngheung island, a special episode with all the couples reportedly, a big shooting with dozens of cameras and a helicopter. Rumor says this special might be aired next next week but there is some trouble brewing at MBC right now;; (similar to strike situation earlier this year..

That Yoona Innisfree ad is about their Eco Handkerchief campaign, advising people to use this handkerchief instead of napkins and tissues to save resources and protect environment. Innisfree will distribute these Eco handkerchiefs also at the SMtown concert in Seoul. The ad mentions Yoona singing the Eco Song

Yoona: “Originally the members shared parts singing this song but for the first time I’m singing the whole song by myself so it is a burden. But the song came out great for my voice color, and I feel great that I can deliver a message about the environment through a song that I sang myself”

Earlier on this evening at 6PM KST,our girls(excluding Seobaby) attended a fan meeting event organised by Dominos.
Some photos has been released through its official Twitter.

END_OF_DOCUMENT_TOKEN_TO_BE_REPLACED

According to a Korean news article and Hyunjin808@Soshified, Dominos’ Pizza, the pizza company that the girls have been endorsing lately and have been filming CFs for, is going to hold a ‘Soshi & Domino’s Pizza Day’ event on August 17th. And who’s going to be attending? None another than the girls –SNSD– and some lucky Domino’s Pizza’s customers.

END_OF_DOCUMENT_TOKEN_TO_BE_REPLACED

Photos and videos for the girls endorsing Domino’s Pizza have been released and the girls have pizza has never looked sooo yummy~! Is it just me or does the Korean Domino’s pizza look super tasty? /drool I’m sure it’s nothing like Taco Bell Mexican Pizza though…

Onwards to the picture spam and “making of” videos!

Yes.. I'll have the "Triplet Special." Heavy on the maknae please. Thanks.