First and foremost, congrats to the girls. At the moment, as of day 2, the girls are still #1 on Oricon Daily Album Chart with 48,428 copies sold–the total cumulative sales being 122,011 copies. They are now the first-ever Korean girl group to top the Oricon Chart on the day of original album release.

Because the first post on 110531 Japan Arena Concert In Osaka is getting crowded with a bunch of stuff, we’re starting a new post for the event. The first part had fancams, photos, fanaccounts, etc. mainly of the first concert at Osaka on the 31st, but this post will cover both concerts (May 31st and June 1st). 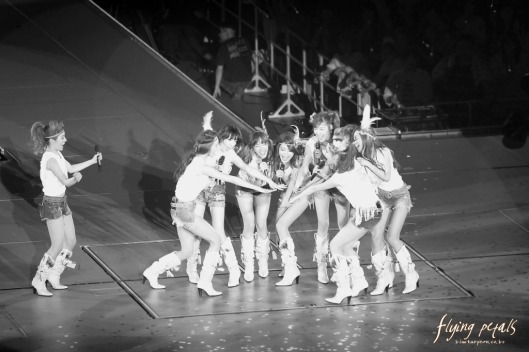 Hopefully, you guys don’t mind them being mixed together.

Before we get to the goodies, here’s a bit of news. According toan article on the SM TOWN official facebook page, Girls’ Generation are the first-ever Korean girl group to top the Oricon Chart on the day of original album release.

GIRLS` GENERATION who has been causing ‘fever of GIRLS` GENERATION’ in Japan proved themselves as the Asia No.1 girl-group with great success at the first tour concert and the 1st rank on the Oricon chart

GIRLS` GENERATION held ‘GIRLS` GENERATION Arena Tour 2011’ at Osaka-jo Hall for 2days from May 31- June 1 and they marked successful start of the tour by gaining tremendous acclamation from around 20,000 audience(more than 9,000 for each tour).

GIRLS` GENERATION fascinated the audience by presenting fantastic performances of unit stages of each member and about 30 songs including hit songs such as ‘GENIE,’ ‘Gee,’ ‘Run Devil Run,’ and their latest song ‘MR.TAXI.’ They even performed Korean hit songs that haven’t released in Japan yet such as ‘In to the New World’ and ‘Oh!’

Although GIRLS` GENERATION’s Arena tour in Japan was the first tour to be held after 9months of their debut, it received enthusiastic response by attracting 450,000 applicants for tickets. Therefore, the concerts will continue, touring six Japanese cities and singing to 140,000 fans.

Since GIRLS` GENERATION gave high-quality performances with their various charms and remarkable singing skills on the fancy looking stage, Japanese staffs also complimented on their performances.

In addition, Japanese media such as Sankei Sports, Sports Hochi, etc., and wide show from TV stations made them realized the high popularity by reporting on GIRLS` GENERATION’s first tour concert in Japan and the release of their first original album in Japan.

Also, GIRLS` GENERATION sold 74,583 copies and it was the first-ever to rank No.1 as Korean girl-group on Oricon daily chart, the day their first Japanese original album was released.

This album attracted attention by dominating reservation charts ahead of the release date and making over 500,000 copies of their first original album for the first run. Compare to other famous Japanese artists or overseas pop stars, this number is historically high so it proved GIRLS` GENERATION’s raised status again.

GIRLS` GENERATION said “we are glad that we finished the concert safely and so happy about the news of our 1st rank on the Oricon chart. We will try our best to give great performances for the rest of concerts, please give us your cheer and love for us.”

Meanwhile, GIRLS` GENERATION is scheduled to attend ‘MTV VIDEO MUSIC AID JAPAN’ that will be held on June 25 at Makuhari Messe in Chiba City, Japan.

At the moment, on the Oricon chart:

& Now, for the goodies from the arena concerts at Osaka.

“Taeyeon was the one Sunny spent time together mostly with. They were staring each other, talking together while mc-ing, holding hands, playing around during the live, etc. They were together like a couple.”

At the 2nd day of the concert during Complete Sica forgot the lyrics for her solo part at the end. Afterwards she slowly went to stand behind Sunny and became red. She made an angry face at Sunny and looked away. It was cute when Sica snuggled up to Sunny with a ‘sorry’ face.

[Trans] Some fan accounts of Yoong at Osaka concert…

1. SNSD Yoona’s beauty can truly be considered out of this world…

2. Yoona→is pretty, has great style, and sexy. I even believe that a female would end up falling for her after seeing her smiling face. I thought her solo was going to be something cute, but it was sexy and cool which I also liked.

3. Dangerous! Very cute! They were all cuter in person then on TV! But they were thinΣ(°Д° Yoona was more of a goddess then I had expected which surprised me(*｀ω´)Ah-I really like her now♥♥♥(smiles)

4. Real life SNSD is the best〜〜♪ Also, the real life Yoona was really the best~♪♪ Now~I could die in peace!!!(smiles)Approximately 3 hours. Complete escape from reality!

5. For some reason, I feel like a guy compared to Yoona(;_;)What should I do (Cries)

8. The cutest! Yoona has a great style and she is beautiful! But I couldn’t see her that well because her face is too small!

9. I really thought they were thin! Yoona’s face was the size of a bean(・_・ Her solo performance was hot(-^〇^-) It was really sexy! There were lots of interactions with the guys on stage, so I thought about wanting to be a guy←

10. I had really good seats…For sure, I received fan service from Tiffany and Yoonaaaaaaa♡ I have a feeling I used up all my luck for this year＼(^o^)／

11. I saw SNSD at a close range…Yoona’s dancing was really cute. I like Sunny and Hyoyeon’s smiling face!

12. I enjoyed it way more then I had imagined(*´艸｀*)Yoona’s solo was a dance number, but it was a mysterious pole dance w However, it was something I haven’t seen Yoona do before, so it was amazing!

13. My 2 favorite solos were the Taeny duet and Yoona. I seriously cried, but I don’t know why(T ^ T)The 2 performances were simply amazing. The solos from the other members were great as well.

14. They were so cute, I cried for reals!w All of them have transcended beyond all human beings( ; ; ) ♡Our Hyun(Seo) was white & was really beautiful(//∇//) Yoona was indeed so beautiful, she stands alone o(≥▽≤)o

NOTE: this post will be updated from time to time so please keep checking back

[& Thank you those who have been giving up tips on new fancams, fanaccounts, etc. in the comments (;]