It’s been confirmed that the girls, along with other artists including DBSK, KARA, BEAST, and 4minute, will perform at ‘K-Pop Festival’ Music Bank in Tokyo on July 13th. The event will be taking place at the Tokyo Dome (oohlala) 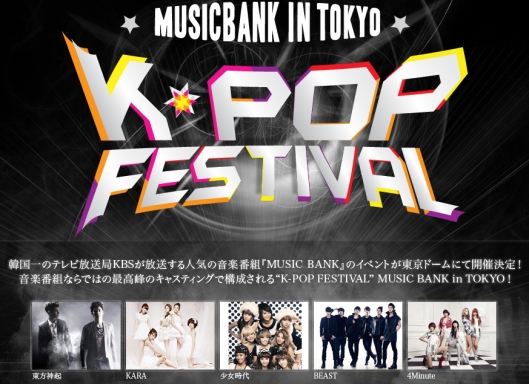 You can check out the update on the official site: http://www.kbsj-musicbank.jp/

As for more updates and rumors:

1 hour to the release of the 1st Japanese album teaser on sment YouTube. Girls'Generation is already trending!

[Rumor] SNSD's Lipton CF is released on 24th May

[RUMOR] Key and Taemin will be in SNSD’s Japanese concert teaser. – arastyle

Though the teaser for the 1st Japanese album hasn’t been released on time yet, stay tune for the update later (;

15 thoughts on “The Girls To Perform On Music Bank In Tokyo & More Updates!”