In September of 2010, the professionals at SnsdKorean released the first results of an ongoing study, titled The Science of Kkab, which detailed Kim Hyoyeon’s behavioral glitches. After decades of grueling fieldwork, the SnsdKorean Team is back and is proud to disclose the results of the latest Soshi study just in time for Sooyoung’s 21st birthday!!!!!!!!

The study discusses Sooyoung from a scientific viewpoint, complete with a hefty measure of serius bidnezz.

Undeniably overpassing the other Soshis in height, Sooyoung takes advantage of her long legs to reach food on the tallest tree. Thus, she gets to eat more and grow even taller. See? It’s an unfair cycle. Number one rule of the jungle- have blessed genes. Anything else, and Sooyoung will take all your food.

Flamingo Sooyoung showing how long her legs are 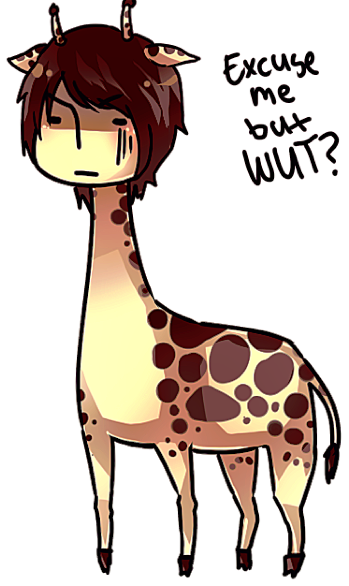 An interesting phenomenon of Sooyoung is her peculiar mating call, scientifically classified as “Aegyo”. While fellow Soshi, Sunny, has been known for her calls that attract fists rather than potential mates, Sooyoung attracts wooden sticks. When you see her about to declare her love for someone, you better keep your f*****g hat on.

In the spring of 2010, the Snsdkorean team embarked on a risky project to encage Sooyoung with a domestic chicken, hoping to analyze the effect of her Aegyo on other species. While the chicken returned her mating call, Sooyoung apparently felt intimidated in the new environment. We thought it was kind of funny.

Afterwards, Sooyoung skinned the chicken and wore its feather suit as a sign of superiority. 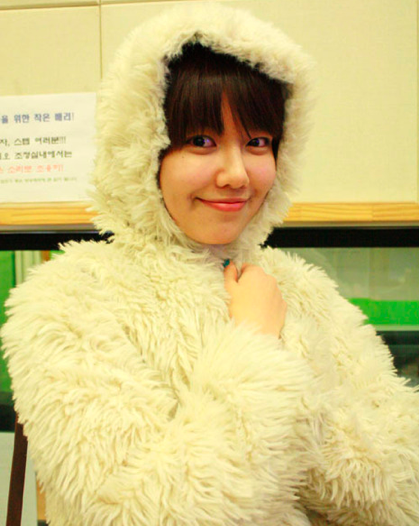 The following is a closeup shot of a successful Aegyo mating call with Yoona. The success, however, didn’t last long, as Yuri fiercely fought Sooyoung to win back Yoona: 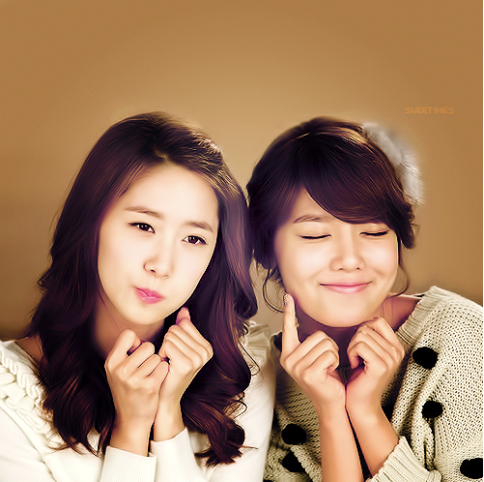 After researching for years, we have found that as soon as Sooyoung wakes up, she begins to feed. Take her food away, and she will kill you. As our fellow researcher, Mintchoc, has elaborated on this characteristic yesterday, I will spare you the deets.

Speaking of killing, it would be worth it to mention that Sooyoung was born, in scientific terms- pretty damn G. As you can see in the following snapshot, she was trained to be a killer, destined to join Kkangpae Shidae. (Courtesy of sLaVe)

However, throughout the years, her true kkangpae self has been dwindling a bit, succumbing to this stuff: 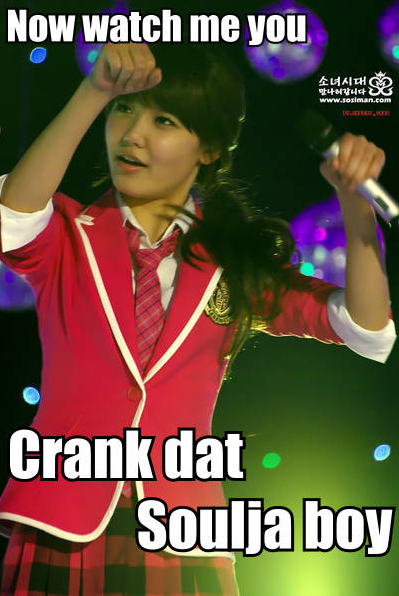 Yet despite social pressure to conform to the norm, it is clear that she still has her G-ness:

[Editor’s note: G and Violent are not interchangeable. However, in this particular study, we are assuming the reader is intelligent enough to discern the difference. Basically, I’m just really lazy.]

Perhaps the most distinctive characteristic of Sooyoung is her ability to make others lol. Her imitation techniques are perfect, as you can see in the following video [start 3:18]:

And in this impersonation:

Despite all this, Sooyoung is an expert as hiding her aggressiveness, her appetite, and other animalistic tendencies. The following pictures show Sooyoung attempting to hide her true character: 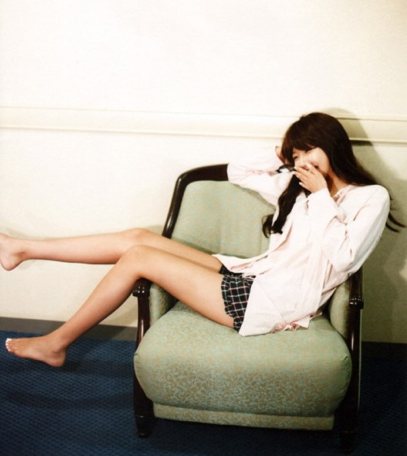 Sooyoung being ladylike? WE BEG TO DIFFER

It’s easy to be overshadowed in a group of 9 Soshis. Sooyoung isn’t the main singer, or the lead dancer, or the resident actress. Regardless, Sooyoung is able to stand out with her personality. Whether she tries or not, her hilarious antics garner interest from all over the world. Sooyoung was once caught saying that “a celebrity is a person who wants to be a child at times, but is forced to become an adult.” The melancholic self-awareness doesn’t detract from the fact that Sooyoung will forever remain a kkabster. No matter how old she becomes, she will always be the girl who wears a chicken suit. And that’s why we love her. So on behalf of the Sones out there, we genuinely wish her a very, very happy birthday 😀

And one more time- 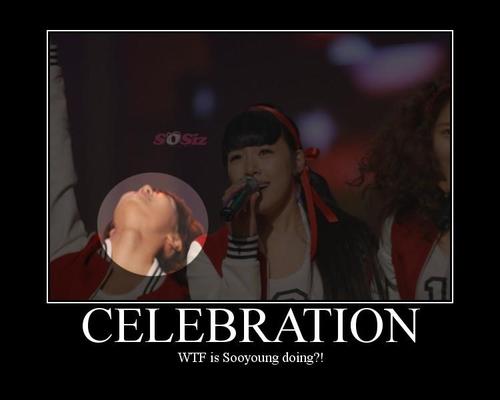 Don’t forget to check back on Snsdkorean for the last of the Sooyoung birthday post trifecta!