Ever wondered how our girls sound with MR removed for My Best Friend? Ever wondered who actually sings during the chorus? Or do you just need an excuse to watch their MuCore perf again?

I really enjoyed watching and listening. I guess if you haven’t realize by now, this is why some of the girls are main vocals and some of the girls dance better :P. And oh! Doesn’t their outfits and the background take you back to Kissing You days!?!?!? Kissing you oh my love~!

END_OF_DOCUMENT_TOKEN_TO_BE_REPLACED

If you didn’t know, SHINee’s Key is known to follow girl group dances quite closely, often being able to imitate them on variety shows. This includes Miss A, 2NE1, and of course SNSD. With a new song out from the girls, he will show some SM family love right?

But of course, there’s much more to hoot’s success than Key and PSYs imitations.  As silis7noy2 (a sone to dote on) explains, Hoot was not expected to be as amajjang as it turned out to be in Korea~

END_OF_DOCUMENT_TOKEN_TO_BE_REPLACED

On Pepero Day (November 11), Sooyoung, Seohyun, Sunny, Taeyeon, and Yuri will be on Happy Together, radiating a luminescence of Soshi greatness even in a small washroom!

Look under the cut for the show preview!

END_OF_DOCUMENT_TOKEN_TO_BE_REPLACED

Continuing the Japanese Domination, our very own girls followed Genie with Gee in Japan which was released on 20th October.

How well have they done? They have maintained the top 5 ranking in the Oricon Weekly Singles chart for the third week, finishing at 5 on the third.

Want a little bit of comparison to their increasing popularity? While Genie took 8 weeks to beat 100,000 copies, Gee took 3.

Here’s hoping that the girls popularity in Japan continue to sky-rocket, I do like the girls singing in Japanese personally :P.

As noted on the girls’ schedules, Soshi split up into two teams today and had two separate fan signings! A lot of fan accounts a couple of fan cams! Check out the beastly compilation 🙂 Also, Seobaby was not present due to a WGM recording (?) or something else. Enjoy! 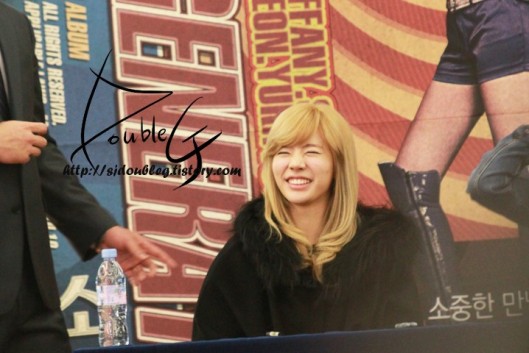