It probably hasn’t been very obvious, but we do have some Taeng bias writers on here!

Although we’ve been primarily covering the content from SM Town in LA, the girls also performed in Shanghai on September 11th as previously mentioned. A new fancam of our little kid leader in the bus after the Shanghai concert is going to melt chu~

The camera was semi-steady until Taeng revealed the heart.. then it just went all over the place for a few seconds. XD

Also, there is another account of her kindness from the owner of a piercing shop, thanks again to silis for the translations~

END_OF_DOCUMENT_TOKEN_TO_BE_REPLACED

Like Loading...
Weeks ago, we reported SNSD would be in a magazine.
Weeks ago, I said I was working on a post, and I totally procrastinated… until today! 🙂 Behold the pictures and articles INSIDE the magazine! 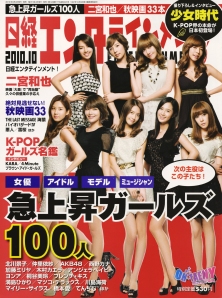 Aside from the batch of pics and interview, we also get to learn the girls’ name in Japanese (katagana). Heck, I wish someone drew one of these for me in Korean when I was new to SNSD.
END_OF_DOCUMENT_TOKEN_TO_BE_REPLACED

Okay..MAYBE the poll wasn’t talking about stuff like THAT but Taeyeon has recently been crowned first place as Aegyo Queen. DC recently conducted a poll called “Idol overflowing with aegyo that melts mens’ hearts.” 16,801 votes came in and our little kid leaded snagged first place with 60.8% of the votes! DAYUM. Not to mention, Sunny took second place with 17.2% of the votes!

Our girls be dominating them polls 🙂

END_OF_DOCUMENT_TOKEN_TO_BE_REPLACED

Apparently there are a number of unseen photos of our girls being spread around now. Check them out as followed!

P.S. Do not ask why is there no so-and-so,this post would be updated should there are more releases. Regarding the first pictorial,the purpose of it is not yet made known.