[Update] This may be irrelevant to the girls, but BoA tweeted that she won’t be attending SM Town Live in Paris due to her conflicting schedules and this means that there won’t be any BoShi moments :[ 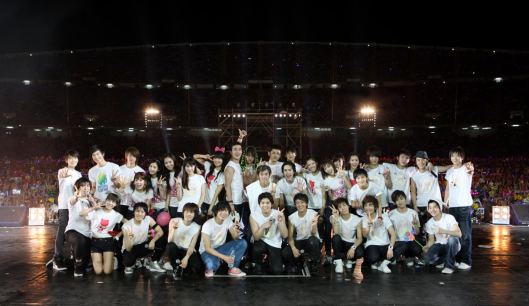 Believe it! It has been confirmed that this year, on June 10th, there will be an SM Town Live concert in Europe–more specifically, at ‘Le Zenith de Paris’ in Paris, France. This is actually the first time as previous years, SM Town Live concerts were only held in Asian countries (ex. Korea, China, Thailand, Japan) with the except of one held last fall in LA, United States.

The girls’ agency company, SM Entertainment, is the first Korean entertainment company to hold a joint concert in Europe and SM artists including TVXQ, Super Junior, Girls’ Generation, SHINee, and f(x), will be present. Unfortunately,

END_OF_DOCUMENT_TOKEN_TO_BE_REPLACED

Yep. It’s true! According to Suchar12@Youtube, SNSD featured in the program, “Kalejoshop,” one of Poland’s biggest new channel (TVN 24) recently, where the reporter commented that “Girls’ Generation is a group at least as popular as Spice Girls.” The program talked about the girls’ successful debut in Japan as well as them wanting to gain more faithful foreign fans. Not only did the news include parts from their “Run Devil Run” MV, they also included parts of their new MV, “Hoot.” (It must be a sign that “Hoot” will be another hit?)

Now…if I were in Poland, watching the news while eating my breakfast and suddenly, they started talking about Girls’ Generation, I would totally spit out my milk on the person sitting next to me and spazz in shock (jk), but seriously! Its not the first time, the girls appeared somewhere in a different country. It just shows how popular the girls are worldwide~

Herro: The girls were also featured on MSN Italy last month. You can check it out [unsubbed] here! Anyone else think the woman’s pronunciation of the girls’ names sound a lot like Christina’s? Watch from 0:30