Social Music site Bugs! recently conducted a survey asking which girl group was blessed with the most awards in 2010. And the winner was…*belated drumroll*

*confetti explodes from canons and fireworks illuminate the sky *

So Nyuh Shi Dae. I never get tired of hearing announcers say those words \^o^/ And witnessing all the ecstasy combined with tears that follows just makes me love our girls so much more. Honestly, I feel like a proud parent – I can’t even imagine how pleased their own parents are to see their daughters shining so brightly and changing lives one S♥NE at a time. 2,829 individuals took part and in the end 65% of the participants surveyed had chosen SNSD as “most blessed” in terms of awards. Let’s hear it for Soshi!!!

Now, receiving results like these in a survey is one thing, but we know it’s not all talk; there are literally shelves upon shelves full of evidence to back up this title. In 2010 alone, SNSD got their hands (both physically and metaphorically) on more than 50 awards!!! From shutting out the competition in music shows to securing the Disk Daesang to being nominated in a foreign land for Rookie Artist of the Year, these nine talented ladies were winners through and through. And you know it doen’t stop there! To fully impress upon you the magnitude of what Soshi has accomplished during the past twelve months I recommend you scroll down and take in the colossal achievement that was 2010 for So Nyuh Shi Dae 🙂

WHOA! I don’t know about the rest of you, but I am positively BEAMING! It’s hard to believe 2011 could be any better, but then again look at how fantastic 2010 turned out to be 😀 And because I know that was a lot of text to take in, here are some super sweet moments of victory I’d like to share with you all, no reading required! (Okay, I lied – there’s a little reading, but it’s more like commentary)

I wonder if any of them have ever accidentally swallowed/inhaled confetti during these awards…? I mean, it literally fills the air. Something to think about. 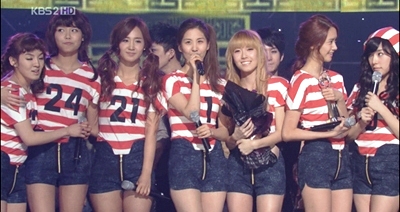 Clearly, in the craziness of the moment Hyoyeon was dazed and temporarily mistook Sooyoung for Sunny. “Sunny, when did you get so tall? Just how many inserts are you wearing??” O__O Eh, it could happen.

Who could forget this fateful moment when the Golden Disk Daesang was announced? SONES won’t. Ever.

This video gets me everytime! Gotta love the delightfully obvious HyoSun arm linking and Sunny’s aegyo-infused rendition of her lines. Also, Fany’s showing no mercy with those eyesmiles. Seeing all nine of them together on stage makes me a happy SONE 🙂 Glad you’re back, Mushroom!