EDIT: Added a fan cam of the wedding at the bottom

SNSD news have been quite slow these days but silis7noy has just provided SONES with some new updates about the girls! Information includes a celebrity tweeting about one of the members, a BoShi interaction, YulTi gettin married, and more 🙂

Let’s start off with this picture:

I believe I failed to include that in the original post about Sooyoung vacationing in America but I’m sure most of you have seen it. This was when she was at the Big Apple aka New York!

In that New York picture where Sooyoung is talking with a chess playing man, the man was lonely waiting for someone to play chess with. Sooyoung talked to and comforted him and said she has no worries in life she believes in God.

You don’t come across girls like these anymore. Walking and sitting down with a complete stranger and even comforting him. I think that says a lot about one’s character. Not many could or would even want to do what Soo did. HOW they communicated is still a bit of a mystery for me but I’m sure her English has since improved from the taxi incident on Factory Girl’s. 😛

Onto the next piece of news..Jung Ryeo Won recently tweeted a picture of her and Sooyoung!

“With my so so adorable dongsaeng Sooyoung. keke heuheu she is an angel.”

This is her twitter if you’d like to follow her~
From singers to athletes and to actors and actresses, everyone sure does love the 9 angels ❤ For those of you who don’t know Ryeo Won, she’s an actress that starred in the hit drama My Name is Kim Sam Soon. If you haven’t seen that yet, I suggest you do. 🙂 Here’s a clip for the curious:

Some recent Sooyoung sightings include her hanging out with Taeyeon and Boa at a mall near SM. And Sooyoung was seen at a driving school, “… with sunglasses on… really tall… she wore casually in a shirt and in skinny jean but still had that aura…”, so she may be getting driver license like other members

BOSHI? DID I HEAR BOSHI? <33 My favorite pairing between two celebrities besides 9PM. The Queen of SM back in Korea too eh? This is all too exciting for my fangirl-ness to handle.

Now about Sooyoung driving…well least she can see the cars ahead of her. I wonder how safe of a driver she is 😛

Last bit of news about YulTi ❤ Okay fine..they’re not getting married but they were spotted at one. Apparently it was for a Music Core’s staffer’s wedding!

Just..to prove that YulTi is real and because I want to spam: 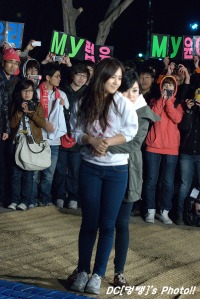 Fan cam from the wedding:

I don’t know about you readers but personally, I find myself enjoying these little updates more than the other news articles. Random sightings, little fan accounts of the girls. So much more entertaining (for the most part) 😀 Long post I know but hopefully you enjoyed reading it as much as I had making it. Ugh how cheesy.