Well, not really. The 9 ladies were featured in the local Singapore teen magazine “Teenage” though.

Teenage, a local Singapore publication catering to Singapore’s teen population has dedicated the June 2011 issue to cover the K-Pop scene. The editor, Jazmin Kelly Six, was fortunate enough to be invited to cover the recent SBS Inkigayo Jeju Special, resulting in the cover story for this issue of the magazine. The trip there was made possible, courtesy of the “Visit Korea 2010-2012” committee, an initiative of the national tourism boards of Singapore and Korea.

In her editorial, Jazmin admitted to knowing “next-to-nothing” about K-Pop, and so felt that she could give an unbiased, neutral report on the whole event. Well, at the end of the whole experience, she readily admitted to being impressed by the sheer talent of all the K-Pop artistes that performed that day and is now a true convert to the K-Pop genre. Personally, I think the close contact with our 9 “angels” had alot to do with changing her opinion of K-Pop music ;).

More details (covering the Girls’ performance and subsequent interview) can be found in the following scans from the magazine. Enjoy ! 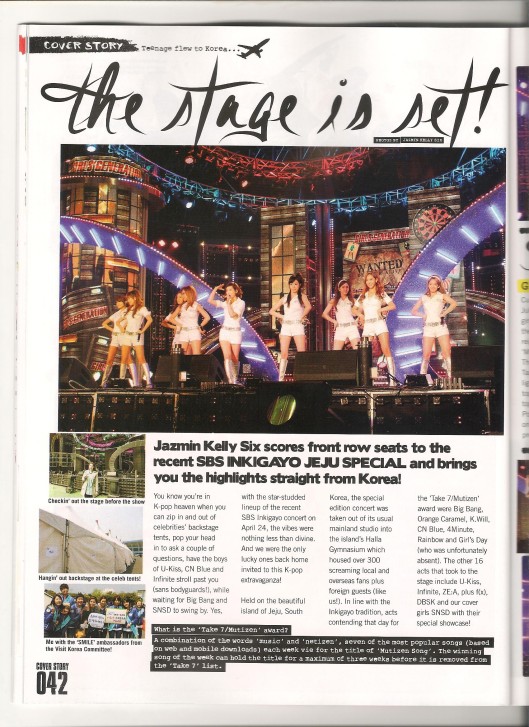 By the way, the editor not only managed to “snag” a front row seat to the performance show, she also got passes to the artistes’ backstage tents. How lucky is that ?!!

23 thoughts on “SNSD In Singapore?”