Details from the event:

It appears that yesterdays fan-meet hosted by Samsung China, allowed not only SONEs to interact with and take photo ops with the girls; but also gave the girls a chance to play around with some of Samsung’s latest toys and gadgets: 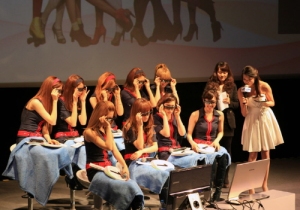 The girls were also asked whether or not they use Samsung products, to which Yuri and Tiffany replied, a Samsung printer and a pink laptop respectively (cue massive applause from SONEs).

Hit the jump for the new pictures/fancams and original post.[ORIGINAL POST]

It didn’t take long for SNSD to appear at the Samsung China hosted fan-meet event, after only arriving at Beijing Capital International Airport a short while earlier. Apparently, the girls were running a bit late due to a traffic gridlock, which they probably were the cause of lol… sorry.

Anyway, no details or accounts have yet to surface regarding the event, although the girl’s did perform “Hoot”. However, this post will be updated when fan accounts become available so stick around.

For now, hit the jump for plenty of fantaken pictures from the event! 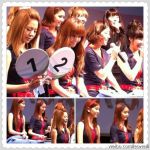 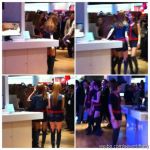 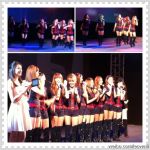 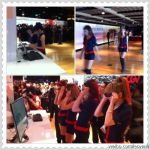 Random fan quotes from lucky SONEs who were able to attend:

“Sooyoung said she wants to visit the great wall”

“sica is bored….she’s talking to yoona”

“yul danced a bit of mr taxi!!!!!!!! the girls were surprised that the fans know the fanchants!!! The girls were looking very happy today!!!

“sica introduced herself as, “hello everybody, we’re jessica”

“the other 8 of them laughed at sica’s mistake”

“The mc said, “lets have a representative from snsd to speak.” Taeyeon  stepped forward and everybody was like looking forward to her speech but  she said, “Congratulations” instead.”

“The nine of them are all fine. Fany smiled at us and asked us to stand in the middle. I was standing in the middle but Tae pulled me to stand on her left. TT.. I heard yuri said thank you…TT…thank you girls”

How nice of Samsung China for giving Chinese SONEs the chance to see and interact with their favorite girls. Now Samsung Australia, are you reading this?