Other than being one of the five basic tastes and a term of endearment, Sweet, is also the name of a Japanese fashion magazine. With that being said, the current issue features Shoujo Jidai looking very “sweet” indeed. 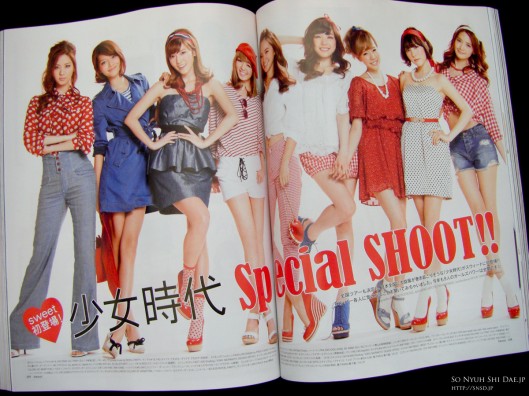 More scans after the jump!

END_OF_DOCUMENT_TOKEN_TO_BE_REPLACED

Shoujo Jidai, have once again made history for being the first foreign artist to win the “Best Pop Video” award for “GENIE”, at the Space Shower Music Video Awards in Japan.

Hosted by Space Tower TV, the awards ceremony celebrates the best in Japanese music television much like the MTV Video Music Awards, and for the girl’s to beat out J-Pop hard hitters such as AKB48 and Perfume and claim the best pop video award, says a lot about their popularity in Japan.

Congratulations to the girl’s and best wishes for their ongoing success in the country.

Hit the jump for a couple of new goodies! END_OF_DOCUMENT_TOKEN_TO_BE_REPLACED