…and the girls keep rolling them in! 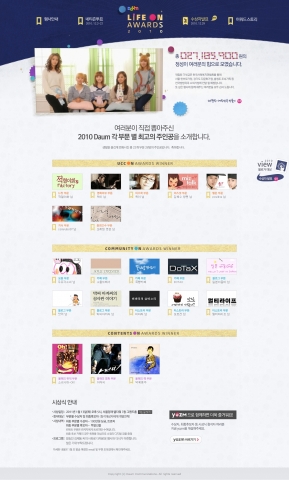 Online votes by netizens compiled between December 2nd to December 22nd  have determined the winners for the “2010 Daum Life On Awards” and  SNSD has claimed the “Music of the Year” award for “Oh!” in the “Contents Category”. There are a total of 22 categories and the winner for each category will receive 1,000,000 Won in prize money and a trophy. Congrats girls!!

*Translation will be updated when available*

What makes these awards even more special was the fact that the proceeds from voting were donated to the Korea Association of Social Welfare Centers, as netizens were charged 100 Won for every vote cast to help their favorites win an award. Throughout the voting period, 27,000,000 Won was raised to help less fortunate families in Korea.

Even though the winners have already been announced, the “2010 Daum Life On Awards” ceremony will take place on January 3rd, 2011 at the El Tower Grand Hall in Yangje-Dong.

9 thoughts on “Another day, another award…”