I was putting together some data on SNSD’s sales so far in 2013 since we passed the half-year mark a while ago, but I realised that some fans might not understand the true meaning of the data in terms of what it really means for SNSD. So I’ve ended up with a chunk of text about SNSD’s 2013 performance thus far, how it compares to their previous years, as well as some background info on how the Korean entertainment industry works. This might be a boring read for some of you…sorry! 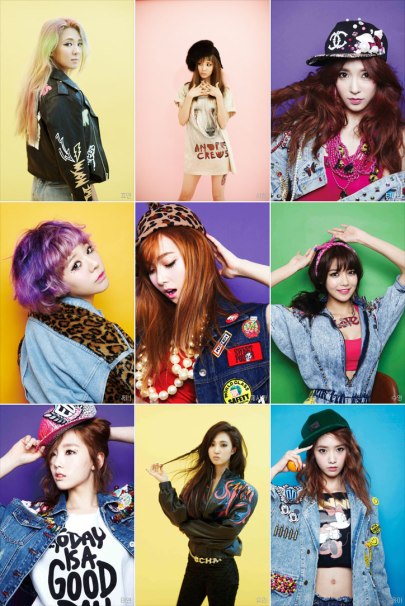 As always, SNSD‘s performance for the first half of the year has been nothing short of impressive, but really that’s what you’d expect of SNSD.

Firstly, let’s talk about what makes SNSD the formidable group that they are, or as netizens like to put it; “the wall others can’t climb over”.

The table below shows the 15 top male artists and 15 top female artists so far in 2013 according to physical album sales. As you can see, the artists selling the most physical albums are idols; specifically male idol groups. In the predominantly digital South Korean music industry, people don’t really buy albums unless they are a big fan of the artist (collecting expensive albums is really just not economical). Basically to sell a lot of albums, you need a lot of fans. This is why idol groups dominate physical sales – because they are marketed specifically to create loyal fanbases that will buy their albums.

Now look below at the top 30 digital aggregates – where the physical sales indicate ‘fandom size’, digital sales are more indicators of how popular the actual song is with the general public, and therefore how well known the artist is with the public. For instance, look at the relatively new groups VIXX and B1A4; although they did well in physical sales, they’re not on the digital  list. This shows that they have sizeable support from idol-fans, but outside of those fandoms, the general public has little to no idea who they are. On the flipside, Huh Gak was unable to sell a lot physically, but he did well digitally; if you pulled a random Korean off the street they’re much more likely to be able to name a Huh Gak song than a VIXX or B1A4 song. Get it?

By the way, definite shoutouts have to go to Taeyeon who is a digital beast all on her lonesome. Future solo career secured, much?

*these figures do not represent downloads, but Digital Aggregates: a point system representing revenue brought in by all digital sources.

So where does SNSD come into this equation? They are one of the only artists that have the ability to top both digital and physical sales lists. SNSD is the only girl group to be in posession of both a Digital Daesang and a Disk Daesang (these are like Korean grammys). This means that where many girl-groups get public attention but are unable to attract large amounts of dedicated fans like boy-groups do, SNSD has managed to create a fandom the rivals the biggest boy-group fandoms. And where many idol groups are able to attract fans but the general public doesn’t care about them, SNSD has managed to become a household name. The only other idol group that can boast that kind of fan-attention as well as public-attention is Big Bang, which is why SNSD and Big Bang are often considered the top two groups in Korea right now, in their own ‘top-tier’. SoShiBang wuh wuhhhh.

Now, how have SNSD done so far this year? As you can see, physically they are selling extremely well – which is to be expected of a group with such a large fandom (no matter the song, fans are always gonna buy the album). Digitally though, I’m going to risk some hate and say that they could have done better. I’m not saying “I Got a Boy” flopped – it is quite impossible for an SNSD song to ‘flop’ at this point (I mean it’s still gotten over 100 million points), but for whatever reasons that I’m not going to comment on, “I Got a Boy” has had a smaller digital impact and less love from the public than SNSD’s previous releases. To put things in perspective, IGAB sold about 300,000 digital albums in it’s first week of release. In 2011, “The Boys” hit about 750,000 in it’s first week. Last year, even sub-unit TaeTiSeo had a first week run of about 600,000 with “Twinkle“.

Conclusively, for all it’s hype, although IGAB in no way did badly, you could say it did badly for an SNSD song. If it had been any other group but SNSD it probably wouldn’t have done as well as it did. 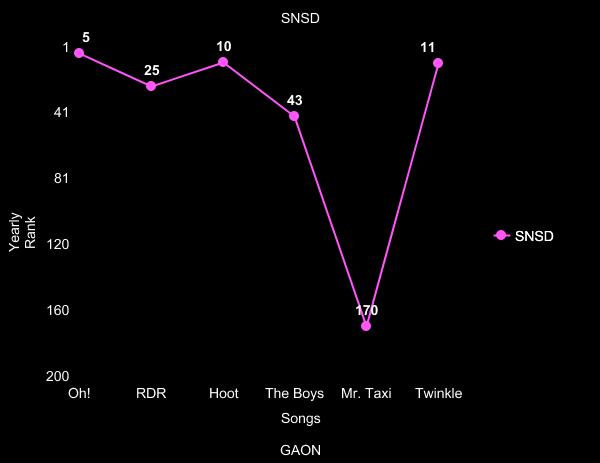 However, if you look GAON‘s (it’s like a korean BillBoard) 2010-2012 graph of SNSD’s charting history (let’s exclude Mr.Taxi because that was an obvious lazy mis-step on SM’s part), SNSD generally have an up-down-up-down pattern with their releases. “Twinkle” finished 2012 as the 11th highest ranking album of the year. IGAB is most likely not going to going to make it into 2013’s top 10, but I guess we can have high hopes for whatever SNSD’s second korean release is later in the year or early next (hopefully…). Tiffany has dropped hints on upcoming SNSD albums and a TaeTiSeo comeback, so that should be taken into account too (then again maybe mushroom is just lost).

Meanwhile, away from the Asian mainland we have Shoujo Jidai chillin’ over in Japan. The first half of 2013 has been a real money-spinner for SJJD. If you remember, SNSD’s 1st Japan Arena Tour generated over 20 billion won (~19.mil USD) in it’s 14 shows. 2013’s Girls&Peace Tour finished up at 20 shows, so logically you’d expect an even higher revenue.

Girls&Peace was released in 2012, but it was released pretty late in the year so I’ll include it here just so that you can get a gist of where Shoujo Jidai stands in Japan right now.

Above are the deets on how Girls&Peace faired in 2012, (they’ve since obtained a RIAJ Platinum Certification, meaning they’ve shipped over 250,000 copies).

Now, a lot of the hype around ‘hallyu’ in Japan has died down somewhat if you compare the insane media coverage SNSD got during their Japanese debut in 2010 to media coverage now. Plus relations between Koreans and Japanese have been more strained in the last year or so. SM/Universal Music Japan can no longer use use the novelty of hallyu to get attention with SNSD, so their focus has shifted to maintaining the Japanese fanbase rather than gaining new fans.

Above is a list of the top K-pop acts in Japan for the year 2012. As you see, SNSD tops it with Kara right on their heels (Kara and SNSD are pretty much of equal standing in Japan). Don’t confuse this as SNSD being a top group in Japan though; they have a strong standing there but they’d be considered an middle-second-tier group if anything, as there’s still no way though could beat representative Japan groups like AKB48 or Arashi.

2011 was a pretty fantastic year for them; they finished the year as the No.5 Best Selling Artist with the No.5 Best Selling Album of the year with Girls Generation, The First Japan Album.  2012 was not quite so fruitful – Girls&Peace finished the year at No.42.
Girls’ Generation was in fact, so much more succesful that it sold well throughout 2011 and 2012, and actually beat Girls&Peace on the 2012 yearly ranking at No.25. If you simply look at the difference in performance between the two albums, one might think that SNSD simply fell out of relevance in Japan. However, the continued popularity of Girls’ Generation, The First Japan Album shows that’s not true. There’s a lot of possible reasons as to why this is the case, but Girls&Peace just wasn’t as popular, although that doesn’t mean SNSD have lost popularity.

In the second half of 2013, SME is likely to be heavily focused on sorta-rookies EXO, and there is also a rumoured f(x) comeback around the bend. I have no idea where any future SNSD promotions will fit into this equation (although they are likely to happen later this year), but I do hope SM lets Shoujo Jidai do some really strong promotions in Japan as well. They sitting pretty comfortably at the top of K-pop, but they’re not yet a top-tier group in J-pop, so there’s still rungs to be climbed.

Onto the next section, let’s talk CFs.

Endorsements are pretty much the best way to measure how much the public loves a celebrity/how good a celebrity’s image is. Obviously, companies are going to want models with positive images that are well known to represent them, and that bill fits SNSD like a glove. SNSD have been the most sought after models every year since their 2009 popularity explosion. Their asking price is high, but they can sell anything.

Above is ze list showing the most popular CF models in Korea every year since 2009. This is a pretty good indication of their good reputation, as well as how much $$ they gots in their pockets.

*I might have missed some but it’s around the 5-10 mark.
**I should point out that YoonHyun both endorse SK Telecom, who have been completely spamming CFs.

So it hasn’t been a massive half-year CF wise for SNSD, but in terms of CFs and endorsements the SNSD members have definitely been working independantly a lot more this year. Eg; Sooyoung for Double-M, Jessica for Banila Co./Stonehenge, Hyoyeon for TopShop, etc. The member that’s been the least active so far this year with endorsements/CFs is has been Sunny I believe….Get off your arse Soonkyu.

Above is the top 15 celebrities of 2013 according to Forbes Korea. The first collumn shows their 2013 rank while the second shows their 2012 rank. SNSD have topped this list in both 2011 and 2012, and are still killing it even though Psy booted them off no.1 with “Gangnam Style”.

SO IN CONCLUSION.
SNSD in 2013 have been sitting snug and comfy in their ‘top celebrity’ status. Although the performance of their recent releases have been somewhat lacklustre for SNSD’s standards, it’s pretty obvious that their reputation and influence has taken no knocks and they definitely aren’t planning on vacating the top spot anytime soon.
What to expect? SNSD are definitely going to rake in hefty loot of CFs before the year ends, and their second korean release for the year, if there is one, is going to be a definite daebak.

If you stuck with the article to this point, hope it was informative!