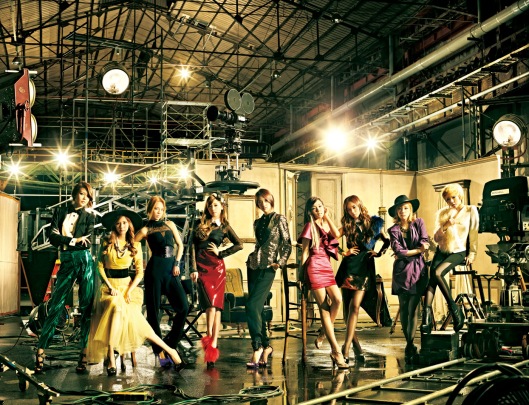 Our ladies have been nominated for two awards at this year’s MTV Music Awards Japan!

“Mr Taxi” has been nominated for Best Video of the Year.  Since it’s release on April 25th, 2011, the video has received more than 47 million views on YouTube!  And remember, this is only official hits from Universal Music Group’s channel.  Plus, it’s just the dance version, no normal video was released (or has since been taken down).

They have also been nominated for Best Album of the Year for their 1st Japanese album “Girls’ Generation.”  If you remember, this album was in the top 10 of the Oricon Chart for a staggering 13 weeks!  A good portion of that time, the girls weren’t even promoting in Japan!  That’s the power of SONEs right there!  Along with the repackaged album, it is the first Korean girl group album to reach 1 million shipments!  Again, more power to us SONEs!  Industry experts have praised this album for it’s solid production and unique sound.  Well, as we know, SNSD is always changing things up now aren’t they?  I actually really liked this album due to it’s harder beats and more of an electropop feel.  Ahhh, brings me back to the days of trance/house/techno.

Videos and album that were released in Japan between March 1st 2011 and February 29, 2012 were eligible for nomination.  The awards show is scheduled to take place at Makuhari Messe, near Tokyo, on June 23rd, 2012.

Online voting is now open through June 8th.  You can cast your votes at MTV Japan’s Facebook page.  1 vote per day per category is allow.  This also qualifies you for an Amazon gift card when you vote!

And just so you remember how awesome the video is with those sexy black and yellow outfits, here you go!