With their current popularity in Japan, it is little wonder that the angelic 9

manages once again to earn another feather for their proverbial cap of achievements.

On July 6th, Tower Records Japan released the results for the K-Pop Chart listing for June 2011.

As expected, our 9 ladies’ maiden 12-song track Japanese album “Girls’ Generation” easily earned the top spot in the listing, despite having only a short release date (the album hit the store shelves only on June 1st 2011).

In addition to debut Japanese songs like “Mr. Taxi”, “Let It Rain”, “The Great Escape”, “Born To Be A Lady”, the song list also included Japanese versions of the Girls’ favourite hits like “Genie”, “Gee”, “Hoot”, “Run Devil Run”.

Pre-orders for the album hit the proverbial roof, making it No. 3 in the Japanese charts. A large portion of pre-orders actually came from fans outside of Japan, attesting once again to the global popularity of the 9 ladies.

Results from Japan’s Oricon charts showed that total sales figures for the debut album hit the 232,000 copies sold sales mark  for the week the album was officially released (June 1st).

To date, approximately 325,658 copies of the album have been sold so far, and, with no visible decline in sales, easily secures the album’s place among the top 10 best selling albums for the 1st half of  the year 2011.

What with the on-going Japan Arena concerts and their innumerable product endorsements in Japan, the angelic 9 ladies have certainly established a firm foothold in the Land of the Rising Sun (or Rising Soshi, as the case may be ;)).

[The album is now at double platinum status (certified by RIAJ, or the Recording Industry Association of Japan), with physical sales of over 500,000 copies sold to date]. 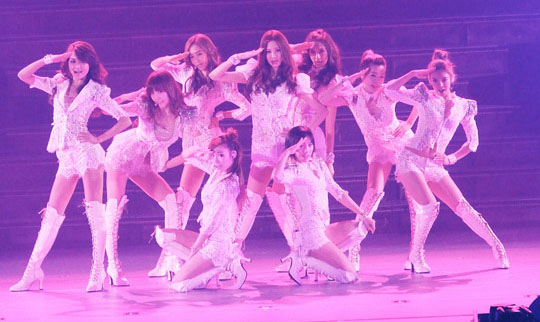