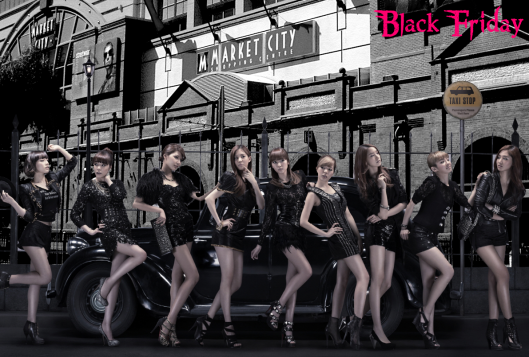 Where shopping begins. And Ends.

It’s been a while since the girls last promoted, and many fans are eagerly anticipating their Japanese comeback Mr. Taxi & Run Devil Run. As their first *new* single in Japan, there’s certainly a lot of mystery surrounding the song style and the type of reception this guy will receive in the land of the rising sun. It was announced today however, that the girls will be re-using the Mr. Taxi ‘Black Soshi’ theme and outfits for their Korean comeback in early May, which will be titled Black Friday.

According to rumors, the music video for Mr. Taxi will end as a teaser, with the girls entering a 9-seater cab (similar to the limousines they had in America with San Antonio Top Limo) driven by ‘Mr. Taxi’. At the beginning of the Black Friday video, the same cab will enter a shopping center parking lot, and Soshi will proceed to do their Black Friday shopping coldheartedly without giving a care about their surroundings. The appearance of SNSD on such a day causes shoppers to burst into 9 billion scraps of chaos in their attempts for a taste of heaven. However, as depicted in the scene, anybody that comes close to one of the girls will be weak at their knees and faint, resulting in bodies lying all over the place like a Soshipocalypse – apparently the true reason why the devil runs.

A spokesperson for SM Entertainment announced:

The concept of Black Friday will continue from Mr. Taxi, but the song will be a cover of American singer Rebecca Black’s ever popular song ‘Friday‘, which has reached over 65 million views and over 150,000 ‘likes’ on the video streaming site Youtube. At SM Entertainment, we are proud to work with the international community to bring the latest trends in music to our loyal fans at home and overseas. There may be an opportunity to work with Ms. Rebecca in the very near future, please look forward to it. We hope the promotional video we have prepared for Black Friday accurately expresses the dominance that Girls’ Generation has on the wallets of consumers worldwide.

In response to the announcement, there was a very mixed reaction amongst Korean SONEs. Some fans were disappointed that SME was re-using the outfits with a continuation video, but didn’t mind that it was a cover:

SM can do better with the outfits, but I’m excited that it’s a song with Western influence. I want to hear Soshi’s English again like in Run Debil Run.

Other Sones didn’t care as long as SNSD started to fricking promote again.

Like many international fans, I’m a bit disappointed that SME decided to do a cover again, but I’m looking forward to seeing how the girls can bring their own flavour to Friday. It’s clear that SM is the marketing genius that it is for a reason, as Friday’s popularity is undeniable and will only bring even more international attention to the 9 girls that changed our world.

Not only that, but the song gives off a very joyous feeling, like our girl’s own Etude. If that’s not enough reason, then.. well, above all else, it’s a catchy song. Just imagine – it’s 2:18 in the morning and you’re the only car driving down the highway at whatever speed you feel like, cruisin’ with all the freedom in the world; tomorrow is Saturday and Sunday comes afterwards.. yeah.