[UPDATED WITH MORE CLOSE UP FANCAMS]
Earlier today, the girls attended the “Daum Life On Awards 2010”, organized by Daum Communications and held at the Grand Hall of El Tower in Yangjae-dong in Seocho-gu, Seoul. At the awards, they performed ‘Oh!’ and ‘Hoot’ and when they went home, they brought another award with them. Can you guess what award they brought home with them? 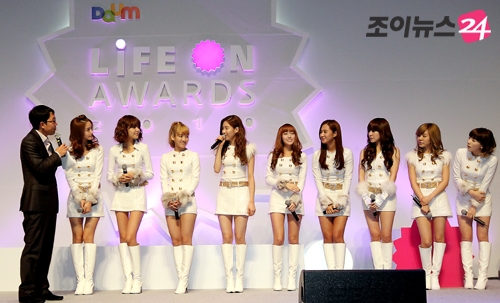 According to Fanwonder, there were 22 categories of awards (including ‘Cafe’, ‘Blog’, ‘View’) and 28 winners in total. Netizens selected SNSD’s ‘Oh!’ as the ‘Music Video of The Year Award’! Congrats to the girls :]

Even though an official broadcast version hasn’t been uploaded yet, a fancam as well as pictures of the girls at the event have surfaced. “Check it out” (as Taeyeon would say)!
-EDIT-
*BTS pictures toward the end