[UPDATE]: According to Daum, S.M. Entertainment has officially announced SNSD’s partnership with Intel. 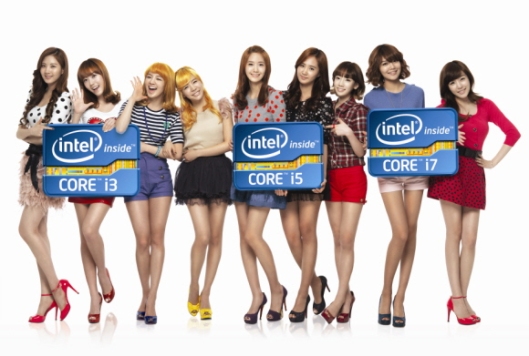 SNSD will participate in various marketing activities to help promote Intel’s next generation of “Core” processors. Targeting the Asian market, promotions will include songs, music videos (3D included), websites and consumer products. A new song and music video will be revealed on the 17th of this month.

Intel will also hold a product showcase in Olympic Park on the 18th, where it is expected that the girls will perform their new song.

The rumor mill has been spiraling out of control for the past week over a potential collaboration between SNSD and a “major” multinational company. SONEs have been actively monitoring all the back channels and although there have been leaks and guesses at the possibilities; nothing has been officially set in stone.

Today, however, it was reported that the multinational company that wanted to join forces with the sacred nine, is none other than Intel (SURPRISE! SURPRISE! Major brownie points to those who guessed it).

According to an undisclosed industry-related source on January 9th, Intel is expected to announce SNSD as their Asian CF models soon.

Although the agreement as well as terms between the two parties are unknown, it is believed that Intel is including SNSD as the substantial and significant part of their promotion and advertising plan in the Asian region.

On January 5th, Intel unveiled its latest processor called ‘Sandy Bridge’ at the ‘CES 2011′ in Las Vegas and they are preparing for a large-scale marketing exercise. SNSD are expected to be announced as the main model of the promotional activities.

The advertising contract between Intel and SNSD is seen as a rather unusual and rare ‘phenomenon’ considering the fact that Intel is largely targeting corporate customers  and practices B2B (Business to Business) marketing where celebrities/artistes’ involvement in its advertising activities is rare. However, it will be interesting to see how this global marketing strategy could promote not only the product from a world-known international IT corporation but also the Korean culture to the world through one of Asia’s most popular girl group, SNSD.

Utilizing SNSD’s popularity, Intel plans to maximize its brand loyalty and consumers’ interest in their products thus, strengthening their position in the Asian market.

However, when asked about the content of the promotional and advertising plan, Intel refused to disclose any details and replied, “we could not confirm”. Intel’s agreement with SNSD is expected to be officially announced on January 10th.

Well there you have it ladies and gents, another global conglomerate has taken a liking to SNSD. Look forward to the official announcement/confirmation by Intel and/or S.M. Entertainment, and start anticipating those advertisements!

Tidbit: I can picture the Intel crew at CES 2011 watching SNSD clips at the Samsung booth and coming up with ideas…