Taking the theater world by storm, I present to you the musical debut of actress Kim Taeyeon! *cue trumpets and uplifting instrumentals*

Today, our kid-leader Taeyeon put on her first performance of her musical “Midnight Sun” and came before the audience not as SNSD’s Taeyeon, but the actress Kim Taeyeon. She danced, she sang, she laughed, she cried, and omg she played guitar ❤

Here are some vids from the “Midnight Sun” Press Call.

The last vid is VERY choppy but it’s the opening scene of the musical, but Taetae only makes an appearance at the end

Haha, she’s so cute. The songs were pulled off flawlessly by Taeng, and YUI‘s (the original singer) songs aren’t the easiest songs to sing, let me tell you. While the acting in some parts were a little awkward, that is an SNSD member we’re talking about, so she’ll only get better. Taeng’s definitely going to work hard, she’s just like that. I’m sure her sunbae Jessica will definitely give her some tips too  if Tiffany lends her to Taeyeon for a little while.

Congratulatory flowers sent in by Sooyoung caught the attention of fans too. The message reads “Taeng-wife! Congratulations on your first performance -Your Husband.”

Rofl, the last time Sooyoung called Taeyeon her wife was a good few years ago…Aww, and here I was thinking she had forgotten all about SooTae! XD

And because snsdkorean is so awesome, I’ve got some pictures for ya too~ 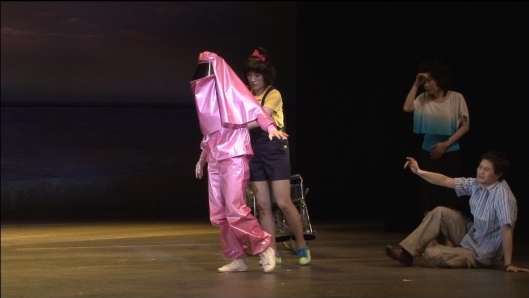 Looks weird I know, but the suit's for protecting her against the sun. 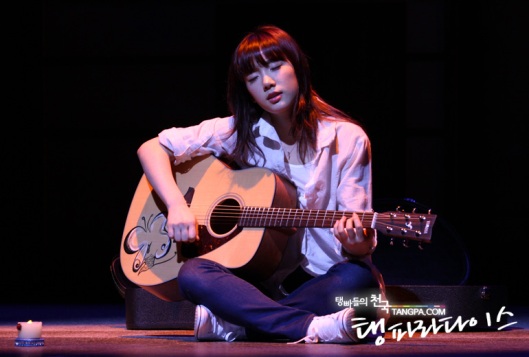 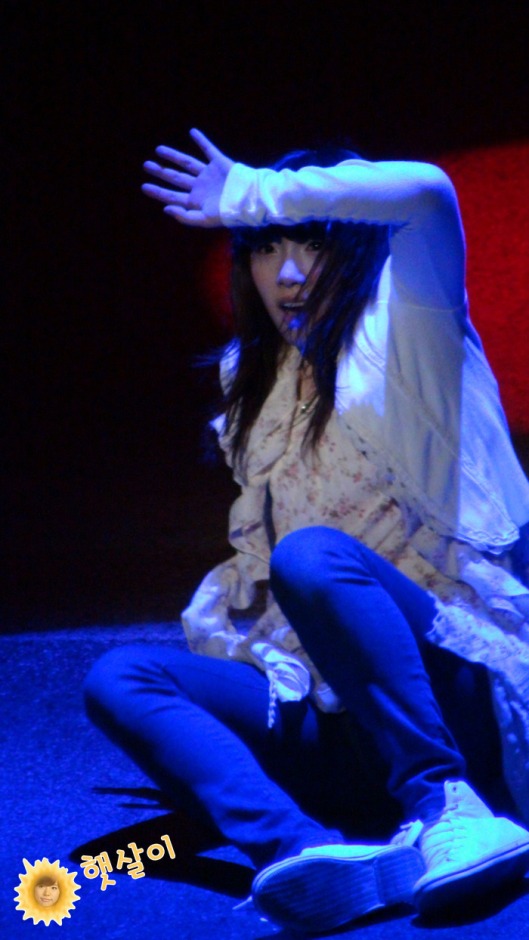 And bonus! Here is a super HQ wall-paper sized scan of Taeyeon from a musical magazine that came out a few days ago.

Congrats on your musical debut Taengoo-ah, good job and good luck on your future performances! Keke. I hope your fans share some fancams with us T__T. Now uh…I typed that all with one hand so I’m gonna go…take a break now.

dreadtech: Taeyeon’s done a magnificent job from the clips I watched (though the crying sometimes seemed a little forced), and it’s only been her first performance, she’s only going to get better. Just quietly though, I think I’ve fallen in love with Taeyeon+guitar XD

27 thoughts on “Her Guitar Gotta Butterfly Onnit! Daww, How Cute.”