It’s time for another feature post! I’m finally able to release this… After such hard work with Thatonezombie and collaborating with him… I get to feature his second post and it’s about none other than the great Lupe Fiasco!

The Signs that Lupe Fiasco and SNSD should collaborate: 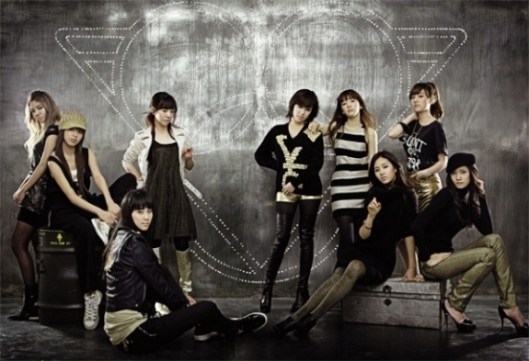 I’ll be copying and pasting everything the TOZZzz man is sayin’, so enjoy!

Consider this a spiritual successor to >>Girls’ Generation vs Wu-Tang Clan<<
As most of you know (and some of you will learn) that I am a Lupe Fiasco fan. Before we go any further, >>go educate yourself<< on the Windy City MC then watch some videos.

This piece of genius took two people. One of them was me and the other was Owaranai_sLaVe aka SLAVEEee, who without her help this thing would have not been created. Now when you read this, I want to know if you think I am a bigger fan of Lupe Fiasco or Girls’ Generation because honestly after doing this I am not sure anymore. Now if you question any of the evidence at all, you can answer to SLAVEEee for the SNSD related facts and you can question me on the Lupe related facts. Now, lets us begin the showing of the signs that this collabo will happen.

Yuri & Hyoyeon are the rappers as seen here:

Apparently, Sooyoung used to kick freestyles during the ITNW days & Yuri said during one episode of MuCore that she likes a guy who can rap, and Lupe Fiasco can DEFINITELY throw his rhymes.
Both Lupe & SNSD all about the positivity

OBVIOUSLY, during Genie, Sunny sings the Superstar lyric for Lupe to notice. Its a clue from SM to Lupe that they must do music together.

Taeyeon probably likes primates (like most dorks do like me), Lupe put out a mixtape called Fahrenheit 1/15 Part III: A Rhyming Ape

Half of them like scary movies, they involve zombies, The Cool (The song and the album) have a zombie for a character

(Conditional) If Lupe likes horror movies, so does SNSD & they were on HMF

Sunny, Yuri and Tiff could be temptresses; The Streets is a character in The Cool and she is a temptress

You can see that Yuri has T.I. in her ipod, he did the movie American Gangster with Common who is from Chicago just like Lupe Fiasco

Sunny likes the video games (So does Taeyeon, oh jeez I do love that dork…) Lupe had a Sonic reference in I Gotcha

SNSD went to Hollywood Bowl, Lupe has performed in Hollywood

Tiffany is married to a gangster (You know who it is), Lupe did a song with Snoop Dogg who is gangster

Both are down with plushies

According to SLAVEEee, Sooyoung, Yuri, Jessica, and Tiffamu think they are cool, Lupe’s second album The Cool

SNSD likes to design clothes as seen in Factory Girl and now seems to have a clothing line of their own, Lupe has >>Trilly & Trully<<

Lupe used to be a DJ back in Chicago, Taeyeon is a DJ for ChinChin

6 of the girls are just high school graduates, so is Lupe and he is all about education just like the girls. We also can’t forget that Seohyeon, Yoona, and Sooyoung are very focused on school while still doing group activities!

Girls like Paris & Tokyo, so does Lupe and he has a song called Paris, Tokyo

Both Lupe & Sooyoung are 5’8 apparently & both are Aries

SNSD dresses up as nerds, Lupe is a nerd as well and dropped a mixtape called Fahrenheit 1/15 Part II: Revenge Of The Nerds

Sunny going crazy on the mic during ChinChin in the Gee days, Lupe does crazy live (and its fucking epic)

Sooyoung is Catholic, Christianity is close to Catholicism, Kanye West did Jesus Walks, Lupe did the Muslim version of Jesus Walks

Jessica is The Genius dont you remember (http://forum.jphip.com/index.php?topic=19581.0) and Lupe on the song Switch (The Science Project) says he is a genius (its part of the science project)
Sooyoung is holding a gun, Lupe has a song called Heat Under The Baby Seat

There is a video of BoA dancing to 2pac, SNSD loves BoA, Lupe does mention 2pac in Hurt Me Soul

Lupe has a song called Sunshine, Sunny is bright like sunshine

In the Song “The Emperor’s Soundtrack” Lupe says:
“Won’t let the CD’s city defeat me
Rub me out like genies; smoke a sweet to my graffiti” Simultaneously a Genie reference and a INTW reference (remember when Sica & Sunny was going graffiti?)

Lupe was in a group called Da Pak before we went solo, Sooyoung was in Route 0 back in Japan before she joined SNSD

BoA & SNSD are label mates. BoA recently has gotten into Pimp C (Rest In Peace), who is one half of the group UGK. Lupe has Bun B (The other half of UGK) in the video Hip Hop Saved My Life and Lupe is featured on one of Bun’s songs called Swang On ‘Em. So through the power of networking, Lupe can get in contact with BoA & SNSD even when Pimp C is dead.

Jessica & Sunny did >>graffiti in ITNW<<, Lupe has a song called Spray Paint

BAM! There you go. The signs that Lupe Fiasco will collabo with Girls’ Generation. If you find any other signs, feel free to post them. At its worst, the collabo would be interesting.

Coincidence? Or is it just a little too perfect ;]