On December 4, all nine members of SNSD participated in an exclusive fansigning event organised by J.Estina at Lotte’s main department store in Seoul. 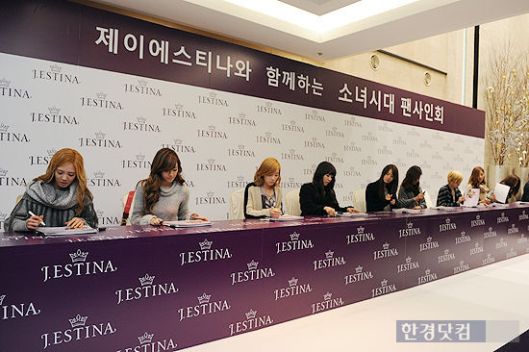 END_OF_DOCUMENT_TOKEN_TO_BE_REPLACED

Right after their third Music Core performance, the girls rushed to Goyang Cultural Center for another “Hoot” fan-signing event. All of the nine girls were present in this event. It’s been a while since they do a 9-members fan-signing, the last time where all 9 members were present in a fan-sign was two years ago, in 2008.

Check out the translated fan-accounts below!

The nine of them attended today’s fansign event. I still couldnt believe that I got nine signatures in one fansign event…

They appeared at 6pm sharp and they wore the gold colour outfits (t/n: They went to the fansign event right after mucore perf). All of were seated according to the sequence in Hoot’s photo booklet – Fany, Sica, Seohyun, Sunny, Hyoyeon, Taeyeon, Yoona, Yuri and Sooyoung. Yuri was chewing something while she was walking towards the stage. Sica said the opening speech, short and sweet, “Today is the second fansign event and this’s the first time that all the members gathered together so we’ve to make it fast, lets start!” . After getting to their seats, Yoona saw a big mic infront of her, she picked it up and play with it. Yuri took it away when Yoona showed the mic to her. She shook the mic like was shaking a hour glass. Then the two of them looked at each other and started to sing Wake up (Background music) in an exaggerating manner. Yuri even sang to it out loud using the mic. Throughout the fansign event, Yuri would either fold her hand to look like a binocular and pretended to look afar or to make a heart-shape sign to us in a fast speed mode. The fans were laughing because of her actions. END_OF_DOCUMENT_TOKEN_TO_BE_REPLACED