Sooyoung and her fellow castmates from Cyrano: Dating Agency grace the July 2013 issue of InStyle. Choi Shikshin is as long and graceful as ever and when did Chunhee become so cool…. Cyrano: Dating Agency airs Mondays and Tuesdays on TvN, and if you haven’t been watching it, it comes highly reccomended. 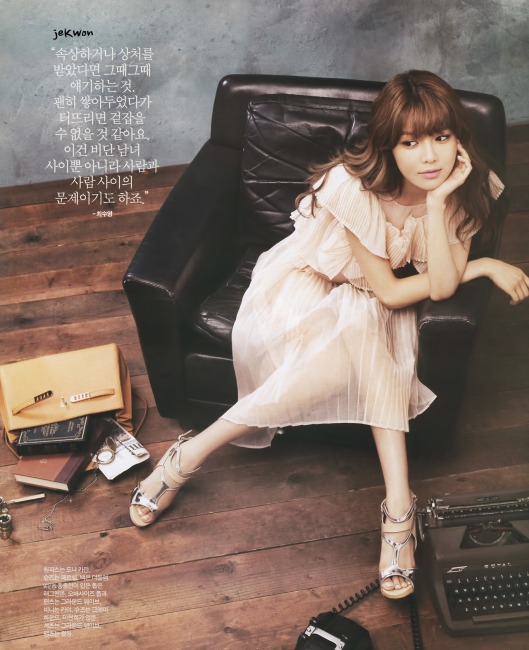 Traditionally, it’s said to not interfere with others’ romances. However, the five people gathered here intentionally get involved in other people’s love [lives]. They act for people who are poor at confessions, and they whisper the needed lines (translator’s note: i.e. scripts) into their ears.

This is about the leading roles in the drama, “Dating Agency; Cryano”, played by Lee Jonghyuk, Lee Chunhee, Choi Sooyoung, Hong Jonghyun, and Jo Yoonwoo. Like people who have gathered to conspire, the five people are standing on a set decorated to seem like a secretive investigator’s office.

Lee Chunhee said something first:
“My role is a bit different from the other four, because I’m not affiliated with the Cyrano Agency.”
Lee Chunhee actually plays the role of “Cha Seungpyo”, who owns a small restaurant. He’s a mysterious character whose true nature interlaced with them is slowly being revealed.
“I’m a kind ‘daddy long legs’ right now, but I’m slowly going to reveal my real intentions. This means that conflicts will soon begin.” (laughs)

Hong Jonghyun, who usually has chic facial expressions, and bright Jo Yoonwoo, who shows curiosity in everything, were the same as their (respective) roles in the drama, “Moojin” and “Ahrang”.
“Jonghyun senior is usually the opposite of chicness. (laughs) However, he’s a deep hyung (translator’s note: what a guy calls another guy who is older than him) and you can feel his affection, even in his heartless comments.”

Of these, the only female, Choi Sooyoung, was chosen by all of the members as the mood maker in the Cyrano team. She is laid-back and fun on set to the point where her existence alone brightens up the atmosphere when filming.

“I’m the mood maker? I think it’s Jonghyuk senior. (laughs) Even though I’m the only girl, I don’t feel uncomfortable. But that doesn’t mean I get special treatment. They all have good manners, so everyone is so considerate that I don’t feel like I’m special. I don’t know if it’s because young and passionate people are gathered together, but I think the mood on set is unusually good.”

Also, the genius director, “Seo Byunghoon”, is played by Lee Jonghyuk. He, the leader of the Cyrano Agency, adds to the weight of the drama with his tough and manly appearance.
“He’s cold, but is also like a dork. He’s a character who has the faint memories about his first love.”

While making a chic pose quite different from his appearance as “Junsu’s Dad”, he amused the actors and staff on set with a few words, which were unclear as to whether he was joking or not. Instead of his hardened charisma, his sincere chatting seemed to be the foundation for their teamwork.

“At first, I wondered how I would pull this role off. However, now it feels like we all melted into our roles, and are actually meeting the characters.”

Even when you hear just the youngest, “Ahrang”‘s, replies, you can assume how united the five unique actors are.