Starting with a New Year, A New Era, A New Generation, SNSD is finally Back with their 4th Album ‘ I Got A Boy’ with millions of Sones welcoming their return.

So, after its release, we all have our reviews and opinions of the song. However, how well did it do in the Charts? With only One hour of its release, ‘I Got A Boy‘ has topped every single Korean music chart including Bugs, Melon, Mnet, SoriBada, Genie and more. On top of that they even topped iTunes Charts in many different Asian Countries! 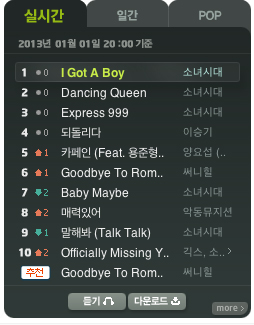 END_OF_DOCUMENT_TOKEN_TO_BE_REPLACED

update: saw the comeback show..they’ve won me over, the song is energetic and fierce live

update 2: sat down after the show and listened to this part by part (repeated each part). It’s..actually very well put together. It encompasses a lot of different genre’s that soshi has tried to tackle over the years with some having more precedence over others, a lot of the things that Soshi do best are nestled in here. The thing is that I feel the thing that has improved 10,000 fold is their choreography and dance. Not to say that they were weak before..But they hit with so much precision now, hip-hop really does bring some much needed elements to a strong dancer.

Sunny’s hair makes me want to puke though, BRING BACK THE LONG HAIR AASDHGASJHFDGAKF.