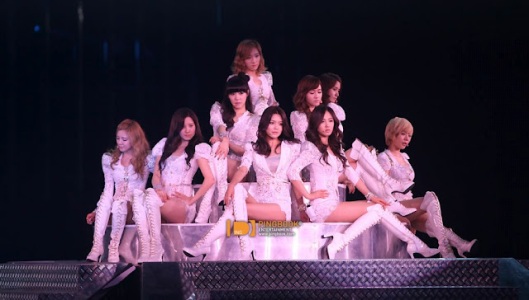 The Guardian reports that SNSD has recorded their full English album, which is supposed to be released through Interscope Records sometime next year!

Does it surprise the experts that the girls are going to try and break into the US market?  “It doesn’t surprise me at all the Girls’ Generation are doing this,” said Steve McClure, the Tokyo-based executive editor of McClure’s Asia Music News. “The South Korean market is limited, so winning over new fans overseas has always been part of the K-pop strategy. The fact that they are riding on the coat tails of Psy is just pure luck – it has just made it easier than it might have been without him.”

We all know the girls dominate in Japan.  With hit after successful hit, I think they will do well in the US market if they have created the right sound that suits the general public’s ear.

“Industry experts say the group’s brand of electropop and brilliantly produced videos will ease them into unfamiliar markets outside Asia” according to The Guardian. “Girls’ Generation totally fit the bill,” said Mio Scobie, overseas editor of US Weekly magazine. “They produce feelgood beats, instantly memorable choruses and, as I’m sure people have already noticed, they’re stunning.”

I’m soooo excited for this!  A full English album!  Finally!  This time it better come out!  It would be awesome one day to hear one of their song on the local radio station just like “Gangnam Style,” but the difference being the general public can actually understand the song.  I know all you SONEs out there will buy the album.  Make sure to help make history with me and buy the album so the girls make that impact on the US market!  SNSD hwaiting!