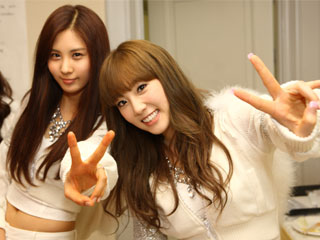 It was recently announced that Kwon Yuri is stepping down from her role as MC of MBC’s Show! Music Core. When the news hit cyberspace, Netizens and SONEs alike started to speculate on who the replacement MCs will be. Many wishes and opinions were bandied online as to the best choices to accompany Tiffany on this iconic music programme. Well, the powers-that-be have taken note of all the suggestions given and have come to a decision. All I can say is: Taeny and Seofany shippers rejoice 😆 !

Yes, the producers of the music programme have decided to go with the 3-MC format for the new year and chosen Taeyeon and Seohyun as the new MCs of Music Core to accompany the current resident MC Tiffany :D.

No strangers to this music programme, as they both have appeared as guest MCs before, it seems that now they will be a permanent feature on the show, together with Tiffany.

Mr. Park Sukwon, the PD of Music Core, was quoted in a telephone interview with TVReport as saying: “Taeyeon and Seohyun will take over for the role of Yuri. We have decided to use a three MC formation.”

He also mentioned: “Taeyeon and Seohyun are not temporary special MCs. Starting from this week, they will continue to work with us as permanent hosts.”

Well, it certainly seems our favourite ladies from Girls’ Generation can do no wrong if even the producers of Korea’s music programmes recognise the appeal these talented young women have in raising the viewership ratings of these TV shows.

So, Yuri, you can now rest easy and devote your time and energy fully to your other scheduled projects (she’s slated to appear on SBS TV drama ” Fashion King”), knowing full well that your sisters from SNSD will ensure that the successes that you have achieved on Music Core with Tiffany will be maintained and, who knows, even improved on, until your return in the future :).