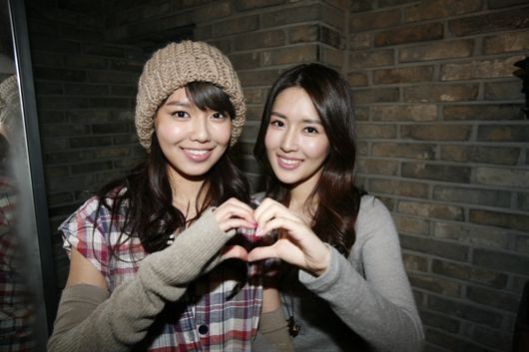 Sooyoung’s unni, Choi SooJin, who was cast in a lead role for the musical adaptation of the Korean drama “Winter Sonata” gave her thoughts on the play…

With the first performance starting September 27th, SooJin said, “Playing the role of YooJin, there are a lot of difficult parts and I put my attention on the emotions and special gestures so as not to miss any of them. Particularly, in addition to YooJin’s pure and innocent appearance as projected by Choi JiWoo sunbaenim, I will try my best to bring out the appearance of the new YooJin. I want to present this work as a big gift for those who can never forget and love the drama ‘Winter Sonata’”.

She added, “Above all, my sister, Sooyoung, who is always praying for me, gives me great strength. Because she never fails in supporting and cheering me on when I have my musical performances, I think she will be coming too this time. As an unnie (elder sister), I want to show my dongsaeng (younger sister) the great side of myself”.

Aww…I’m sure you’ll be at that first performance Sooyoung!  Good luck to SooJin in her performance as YooJin and good luck to Sooyoung as she and the girls make their Korean comeback next month!  Choi sisters daebak!

11 thoughts on “Sooyoung is unni’s support and strength”