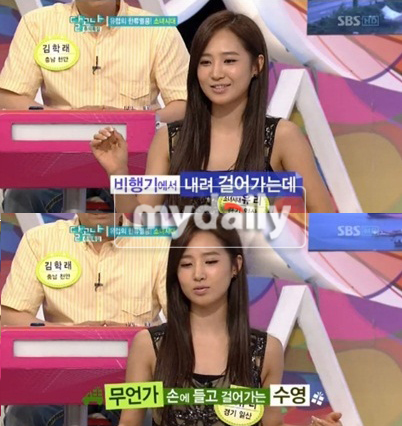 They began their guest appearance by talking about SMTown Live in Paris and some of the stories from that trip.  One story in particular did stand out.  Yuri explained, “When we were walking off the plane, Sooyoung was half asleep and was carrying something in her hand. I thought it was a bag, but it was actually a cushion.”

HAHA, awww Sooyoung!  Hopefully with your current time off, you’re more rested and stronger when you return!  Get well soon!  Fighting!

7 thoughts on “Yuri reveals a secret about Sooyoung!”