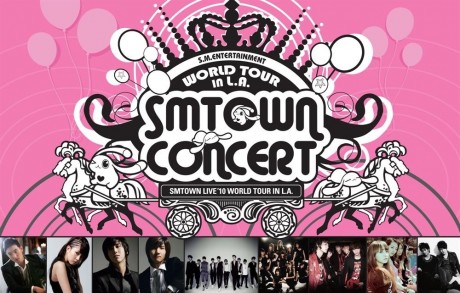 In less than 36 hours S.M. Town Live in Tokyo will kick off. Even if you’re not attending the concert you can anticipate new fan accounts, fancams and, of course, pictures!

Tickets for this show were difficult to come by, so for those lucky individuals whose ticket applications were selected charge your camera, throw on some pink and get ready to have the time of your life! Japanese fans have exceeded the total ticket sales by sending in over 400,000 ticket applications. That’s more than 16x the available number of seats! An impressive feat for sure, but what really gets me is the shock those in charge of ticket selection and distribution experienced when they realized just how much interest the concert was garnering…I mean really, we’re talking Girls’ Generation, SHINee, Super Junior, TVXQ, BoA, and f(x), to name a few – why the surprise? 😀 Officials were encouraged by the excitement displayed by fans and are highly anticipating tomorrow’s and the next day’s performances. Fans whose ticket applications weren’t chosen have attempted to snag seats by means of bidding websites where prices for tickets soared into the thousands (in US $). Such tickets were nearly 10x more expensive than the original selling price of around $300 (358,974 Won or 26, 500 yen). In addition to surpassing initial expectations, the S.M. Town Live concert will be the first to feature artists all under the same company in Japan.

S.M. Town Live in Tokyo will be held at the National Yoyogi stadium on January 25th and 26th. Now…let the fanchants begin!!