Girls’ Generation stepped foot Into the New World a little over 3 years ago as a 9 member girl group, and many things have happened since then. With a dynamic that was very different from other artists, many downplayed the group’s ability to succeed in such a competitive environment right from the start. Some questioned the relationship, and whether or not the members actually liked one another; after all, you’re putting a large group of very competitive girls together. Even six months after the Beginning, their futures were uncertain as members were dragged into various controversies across the web.

Fast forward to today. Soshi has accomplished more than anyone ever imagined they could – fans, antifans, and grandmas included. They defied everybody’s expectations with sales, popularity, and awards, but the gold lies in the fact that they’re still together. No members have been added, dropped, or replaced; they’re still the same 9 so nyuhs from before, just a tad bit more mature. All of the struggling, hardships, and craziness they shared while up against the doubts of many have only made them stronger. Oh, and the relationship between the members? We like to call it soshi bond, thanks. 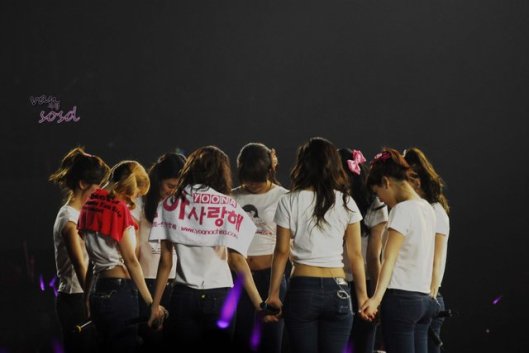 It’s interesting to look back at the comments people made in the past when the girls first started out, as it certainly shows how far they’ve come. Ironically, many of those individuals have since become very dedicated sones, making the connection all the more special. While all of us started practicing soshi-ism at different times, the girls have become an important aspect in everyone’s lives. To simplify it without understating the gravitational pull they hold, the lyrics You make my life complete is accurate for many across the globe. To break it down further? We’re in love.

There, I said it. For me, for you, and for the closet fans. We’re in love with So Nyuh Shi Dae. To some, it may seem like weird concept. To others, you may wholeheartedly agree. The amount of sweat and tears the girls put into what they do is only rivaled by the love and dedication sones bring to the table. The release of albums with posters and cards will inevitably drag us into oblivion, but we knowingly head down that spiral and would make the same decision again if given the choice.

Maybe it was just curiosity at the beginning, and we didn’t really know what we were getting ourselves into when we hit up that ‘related video’ link on youtube. And perhaps, we still don’t know why we’re involved in all of this or how it got to this point, but this much was for sure upon introduction: we wanted more. One thing lead to the next, and it eventually became somewhat of an addiction. Imagine, what would your life be like if you never got involved with them; if you weren’t introduced to SNSD? It’s hard, isn’t it – to depict such a reality.

*brief pause while you think*

But it wasn’t supposed to be like this. You’re a hardcore classical metal/*some other music* fan, and would never listen to kpop. You would be better off not heading to bed at 3am on every single school night because you’re up spazzing, and you might even be able to buy that new TV for your room if your ‘investments’ didn’t consist of CDs and photobooks. Now that you’re in this mess already however… is a life without Soshi worth living?

And what if we were all making a big Mistake, practically just giving SME’s new found monster anything it wanted? Even if we wanted to abandon it all and live a ‘normal’ life (pfttt.), we’d only just end up back at the Beginning.. and falling in love all over again. Once you’re in, there’s no escaping. We’re in it for the long run. The good, the bad, we’ll be there for it.

Is it really love though if we’re separated by oceans, and haven’t even seen the girls in person? (Who, by the way, are effing gorgeous) I mean, we only know of them from the internet, how can you call it love? Maybe it’s an extreme, but I dare say It’s Love. The impact that they have on our lives is tremendous to the point that it couldn’t be anything but. Even if you don’t meet them in your next 9 lifetimes, these emotions are still very real.

That’s not to say we don’t want to be right there with them in Korea, Japan, or wherever they might be. Of course we’d like to meet them, eat a meal with them, have them introduce you to their parents for marriage, etc., but just their existence alone gives us joy every single day… and that in itself is already a sign that you’ve gone crazy. But even then, we wouldn’t have it any other way.

SNSD is loved not only because of their looks that could turn a female ghey, but also because of their personalities – pure hearts that are sometimes kind to a fault, silly antics that would have you thinking these were 9 year old boys, and mistakes that show they are still human. Like A Star, sones will watch over them and shine a (pink) path in the darkest of times. Whether that be figuratively or literally, a light in the dark will only shine brighter.

Some day down the road however, Girls’ Generation will probably cease to exist… but that doesn’t mean everything we’ve put into this was a waste; it won’t ever be a waste. There is no better way to spend time than on something you love, and that will hold true under any circumstance. All that we have experienced so far may one day only be a memory, but it will be a damn good one. Such an incident may very well be one of the biggest heartbreaks of our lives, despite being just a bunch of random people across the globe. But this love won’t be something we’ll regret; even if it were, it’s a love that we would rather regret being involved in than regret not knowing what joys would ever come of it.

We crawl, walk, run, and stand together with soshi – we are sone. Although there will come a day when all of this madness reaches an end, we will most certainly fall together as well. It won’t be today and it won’t be tomorrow…hell, there’s even the slight chance we’ll spend the rest of our lives together with ahjumma shidae; but right now, the world is ours.

110 thoughts on “Through Thick, Thin, and Tangents.”