For those who don’t know, a little history lesson. There are three well-known girl groups who debuted in 2007, these being Wonder Girls, Kara and our very own Girls’ Generation. Wonder Girls and SNSD had alot of interactions back in 2008, but Wonder Girls went overseas to promote so while they were gone, Kara and SNSD became like…total BFFLs. 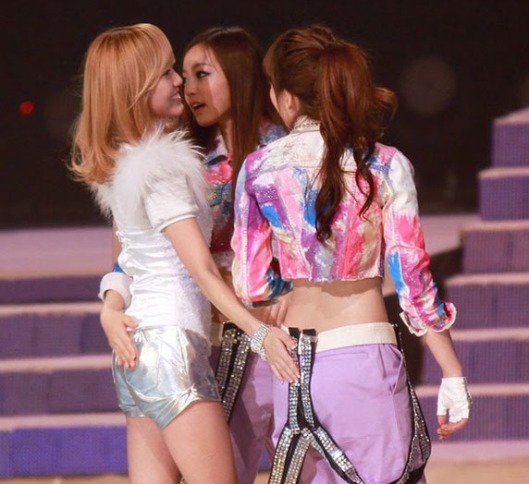 And as much as I love SoKa, I always thought it was a pity that Wonder Girls didn’t get to join in on the molesting bonding even though they’re part of the ’07 WonSoKa line.

However, WG just came to Korea~ Yay! 😀 Taeyeon and WG member Yoobin are known to be really great friends, and ex-WG member SunMi is a huge Taeyeon fan. Recently the WG girls were on WinWin, and Taeyeon was like, super happy about it. She was very energetic and smiley throughout the recording. She must be really happy that WG are back in Korea, as she even called Yoobin, and also said that she missed WG dearly on ChinChin one time. 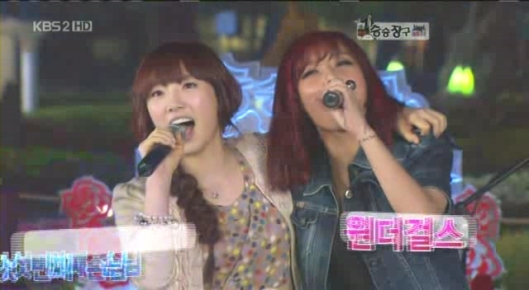 Happy to be re-united haha.

Here are some cute TaengxWG cuts from WinWin.

WG and Taeng dancing to ‘Oh!‘. Taengoo is hyper and adorable in this. XD Love the way she looks embarrassed right afterward heheh.

There has also been alot of YoongxWG interaction, as WG was a guest on Family Outing 2. The episode will air soon, so I hope to see alot of Yoona and WG love. 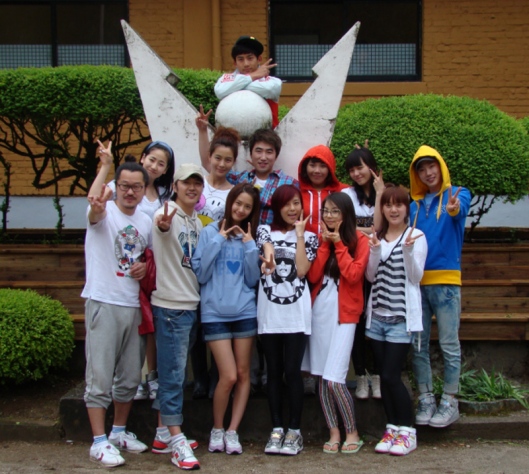 In this cut of FO2, JoKwon calls up SunYe who he is close to and Yoona talks to her and expresses that she wants to become friends~ Yoona is very sincere and sweet.

It looks like Yoong got her wish at the recent Dream Concert, as there are fancams of Yoona and SunYe actually holding hands! (*fangirl squeal*) They must’ve gotten alot closer after recording Family Outing together.

Aaand some Hyoyeon+Yoona with Yoobin (I think…=_=). In a fancam, it looks like Yoona’s looking over at Yoobin wondering if she should talk to her, and Yoobin is expecting her to, but Yoona doesn’t because she doesn’t know what to say. Then later Yoong’s like, “I’m gonna do this!” and talks to Yoobin which is good considering Yoobin’s kind of shy I think.

Jessica was being pretty chummy with the WG girls during the Dream Concert too. She’s always been the type to get uh…phsyically intimate with girls pretty quickly anyway. I mean hand-holding and hugging, okay!? 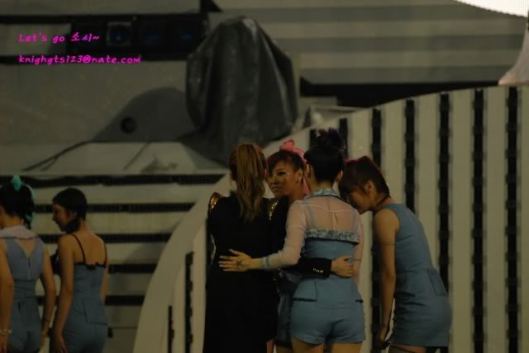 Plus, because Sica got brought up and we’re on the topic of the Dream Concert, Sica with her lil sis Krystal of f(x) for you Jungbians out there. There was alot of Jung love at last year’s DC as well.

And the Jung sisters with Siwon of Super Junior. Mainly because I just find this picture amusing. SMTown love ftw. 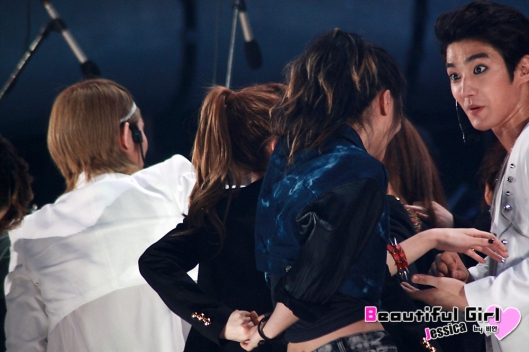 There was also a whole lot of SoKa, 9PM and Super Generation…I think Fany was talking to Bekah of After School too (English speakers haha)…Oh, and a Seohyun and Yonghwa interaction too! I think Seo was talking to her hubby as he got off stage. Maybe asking him how his voice is doing or something, as he’s been suffering vocal cord nodules lately. (Like Fany T^T)

Well, all this just goes to show that even though different groups get pitted against each other as ‘rivals’ and the like, most of the groups are all very chummy and on good terms. ^^ I love seeing girl groups interact, I think it’s quite sweet. I’m hoping for some more WonSoKa soon. 😀

22 thoughts on “Wonder Generation~ How I’ve Missed You.”