chin chin, chinchin, taeyeon, the end of the world for some sones.

2 years ago (and a little bit more), our kko kko ma leader became a dj for MBC’s Chinhan Chingu radio. At the time, it was just another radio show. Now, it’s one of the top in Korea. She came, she conquered, and now she’s leaving. 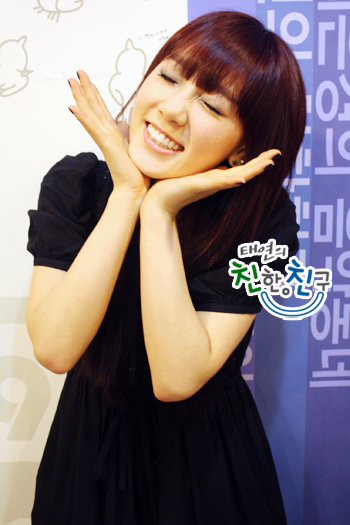 With Taengoo’s contract with MBC coming to an end, there was much speculation as to whether or not she would continue djing for the station. It has now been officially announced that Taeyeon will be withdrawing from her djing activities, and her last show on the station will be on the 25th of April. SM entertainment responded by saying that Taeyeon will get more time to rest and prepare for her upcoming musical, as well as overseas promotions in the near future.

When MBC hired Tae Tae, I honestly don’t think they had expected her to be this good. Sure, she was the leader of girls generation, but this was 2 years ago when they were still promoting Kissing You and Baby Baby; when SNSD had not yet completely flipped the industry upside down. Normally, there are two djs on a radio show. If one of them happens to be sick or has other schedules, the other one can still do the show by themselves. But for an entire year after Kangin left, Tae didn’t have anyone to do that.

Cake is what you get when you're awesome.

Everyday, irregardless of her busy schedule or condition of her health, she was there. Her dedication to what she does is unparalleled, and has certainly paid off. In the relatively short amount of time that she was there, she’s made chinchin what it is today: one of Korea’s most listened to radio shows. If your company wanted to promote an artist, then you would want them to be guests on Chin Chin. Not only has she won awards for her work, but the numbers prove what she’s done; numbers don’t lie. Whether you’re a fan or an anti, you can’t disagree that the success of Chin Chin was a result of Taeng’s commitment.

Chinhan Chingu. Best/Good Friends radio. Is there a more fitting name for her show? While many radios call their viewers a ‘family’, you can tell that Taeng DJ truly does love her (third) family. And with her dorky laughs, naive personality, and friendly aura, who wouldn’t love her back? Both (if I’m not mistaken) of the PDs for Chin Chin certainly do, even going out of their way to defend her when controversy arises.

Not loving her should be illegal.

While it’s sad that many won’t be able to tune into heaven any more at 8pm KST, it’s also relieving to know that our beloved leader will get more time to rest. However, with Win Win, musical preparations, Sunny, as well as album promotions on her schedule, she is still one of the busiest members in SNSD. As fans, we couldn’t be more proud of what Taeng has been able to accomplish and can only hope for her happiness. Maybe one day, we’ll be graced with hearing Taengoo’s lovely voice on the radio again. But right now, the airwaves sure do seem a lot more silent…

Update: This is a small clip of today’s chin chin. It’s not subbed, but it seems that Taeng shed some tears over leaving chin chin soon.

Another shoutout to procrastinatoress for helping me with this post. =]
by: greeentee@snsdkorean.wordpress.com