Jessica’s me2day is real! Today she posted a new picture of her and Krystal (heh they’re actually look alike in this pic! :D) 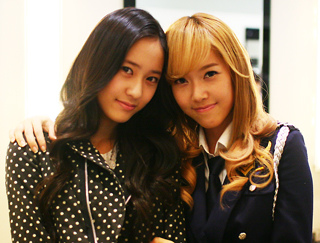 Awww aren’t they so hot cute or what? I fail at Korean, but I think the caption said “My little sister… I really love you… Krystal and the time we spent” (????)… or something along those lines.

How do you like the Jungs’ sisterly love? I found it super sweet, I like it — makes me wonder how it is like to have a sister (instead of one annoying little brother). However some people think that the sisterly love might be a mere publicity stunt done by SM to promote Lil Jung’s group, f(x). Well, it’s very plausible and I won’t blame them to make use of the blood connections. Publicity stunt or not, I wish I can see more of Jung sisters interactions in the future.

At times, I feel sorry for Krystal for being labeled as “Jessica’s little sister”. I guess it must be hard for her in a way, as she’ll be constantly compared to her sister and what not. On a recent interview with Vogue Girl, Krystal said, “They still call me by, ‘Jessica’s sister, Krystal’. Well since it’s only the beginning, it’s alright. As a sunbae (senior), my sister cheers for me, and also gives a lot of advice, so I like it.”  It’s known that Jessica gave her words of encouragements after f(x)’s debut stage, “After only saying good job, she continued saying nonsense (laughter). I tend to sweat a lot, and my sister told me to be more careful because you can see all the beads of sweat, and she also said to work harder on my face expressions”.

When the interviewer told Krystal that someday it’ll be ‘Krystal’s unnie, Jessica’ instead; she replied, “If my sister saw this interview, I’m afraid of what she might do (laughter). [LOL that’s Don Jess for ya] I need to work harder, in everything.”

Ah. I thought it’s weird enough for me to be in love with a girl (and eventually her eight teammates), and now I think I love her sister too. Oh look what Jessica Jung could do to your life!