..wow..just WOW. How ridiculous. Please read for yourselves and judge..

cathode@ soshified:
Our girls went to GaRak high school to perfom…Overall, it was a fail. During kissing you + babybay…fans were pushing each other and many people fell and got hurt. Some non fan shouted “this is why DC happened” + “Soshi fans are idiots”…In other words, it was a complete chaos. As the situation exacerbated, our girls were worried. Some fans said, “Sunny had this depressing look…” Anyways, due to chaos, they had to stop the performance; our girls went back in while the MC tried to pacify the wild crowd. Few moments later, our girls came back to peform GG and it was much better. However, many people kept pushing each other. As a result, some people left. 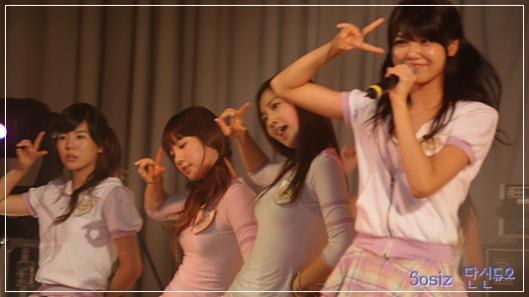 you can see that sunny was worried…

I edited some parts out. But yea….ugh T_T

There was another performance at GyungBok high school. Overall, everything went smoothly. Although there were some rude fans, who stood up and blocked people’s view, majority of the fans behaved; unlike some fans at Garak who went berserk.

Thank goodness, at least this one was little bit peaceful.

well. at least the next performance went a little better. Sunny please smile again and dont be worried

Sooyoung, props to you for still smiling through that performance!

Remember we are S♥NE’s. Soshi fighting!