Yesterday on June 8th’s Seoul concert, during SNSD’s performance of Baby Baby, all the SONEs in the audience transformed their pink ocean into a yellow ocean as a fan-event for Seohyun, as yellow is her favourite colour and June is her b’day month. 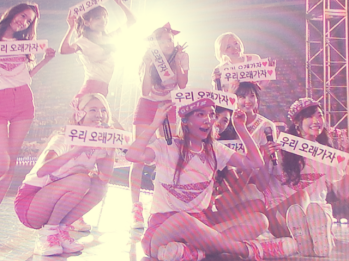 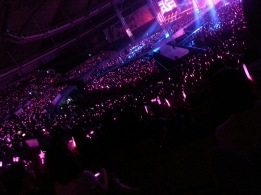 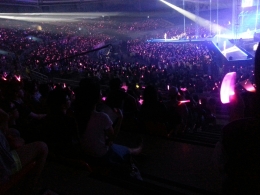 Today, SONE’s outdid themselves on the June 9 concert, with every fan in the audience holding up a small banner that said “우리 오래가자 ♥”. It’s hard to capture the beauty and simplicity of this phrase in English but a rough translation is “Let’s go on for a long time.” Fans in the audience report that a couple of the girls teared up at the gesture. Later in the concert they even asked to see it again, with the members getting their own banners off of the audience. At one point in the concert, the girls even had the lights dimmed in the stadium so that they could see the pink ocean better (aww), and tried to get a wave happening.

SONEs today even managed to score themselves a second encore. When the girls left after the first encore, the audience continued to shout “ENCORE!” for five minutes despite staff telling them there was no more. The girls complied and came out to perform Gee, and then told SONE to go home, lmao.

Let’s go on together with SNSD for a long time. 🙂