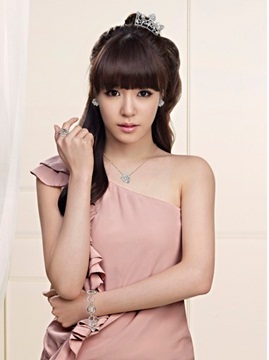 Once again, it is time to celebrate another highlight in the Soshi calendar for SONEs all over the world – the birthday of our favourite “mushroom” and “eye-smiles angel”, Tiffany Hwang 😀 ! Born on the 1st of August 1989 in San Francisco, California, USA, and given the birth name of Stephanie Hwang Mi-young, nobody could have imagined then that this little child with the captivating “eye-smiles” would become one of the most popular Hallyu stars in the entertainment universe that is K-Pop. 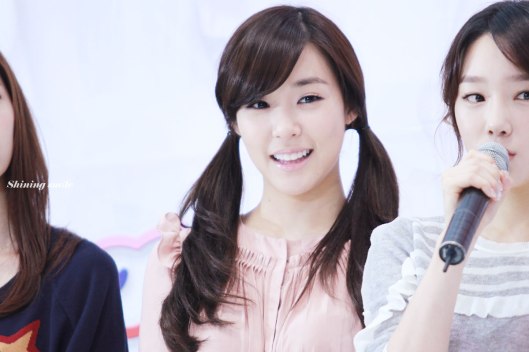 Gifted with talent and a sense of personal ambition way beyond her years, she took the bold step of leaving her family and home country at the tender age of 16 years, to travel half way across the world to South Korea, to join SM Entertainment to fulfill her dream of being a singer and performer.

A devout Christian, her faith in Our Heavenly Father’s divine guidance in her life has been repaid manifold, for she was blessed to be part of a group of 8 other beautiful, caring young ladies, who provided her with the needed emotional and spiritual support (in order that one may survive in the “cut-throat” world that is K-Pop entertainment), and who, together, go by the moniker of SNSD (Soshi to fans ;)). 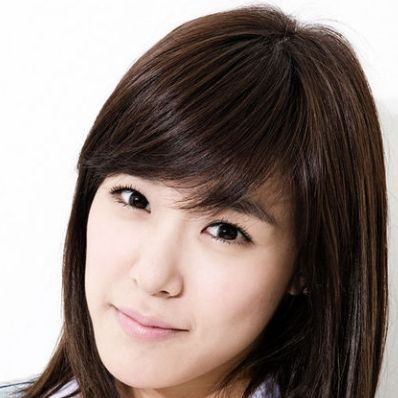 Yet, inspite of this, she never rested on her laurels, always working twice or three times as hard as the rest of the Soshi ladies, in order that she minimizes any mistakes that she makes whilst performing together as an idol group on stage. At one point given the ignominious nickname of “DdilFany [띨파니]” (clumsy Fany), her constant efforts to keep on improving were not lost on her fans and fellow SONEs, who fully appreciated the efforts that she had put in. In fact, her “mistakes” whilst performing actually endeared her more to the Fanytastics (the sobriquet used by her loyal fans) :D. 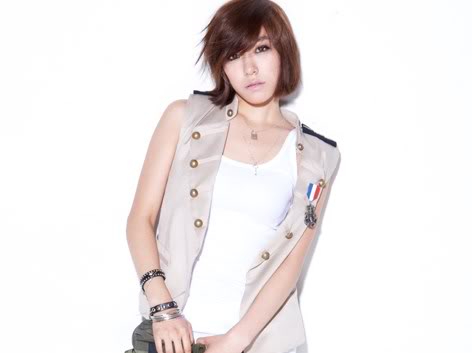 Another favourite term used to describe Tiffany is “mushroom”, which came about when she made a simple grammatical error, early on in her career with SNSD, whilst pronouncing the Korean term for “gems” (as she still had not fully grasped the intricacies of Korean enunciation then). Rather than being a term of derision, the word “mushroom” suddenly became a term of endearment to her fans, bringing a smile to their collective lips each time the word is mentioned :).

Finally, and most importantly, who can ignore the “killer eye-smiles” that Tiffany displays each time she’s on-stage performing, or meeting up with her fans and other SONEs. A perfect upturning of both eyes into little crescents of cuteness, coupled with her megawatt toothy grin, the overall effect has been liken to a visual tornado of sorts, able to melt the hardest of hearts, and turn fully grown adults into “whimpering souls” :lol:. 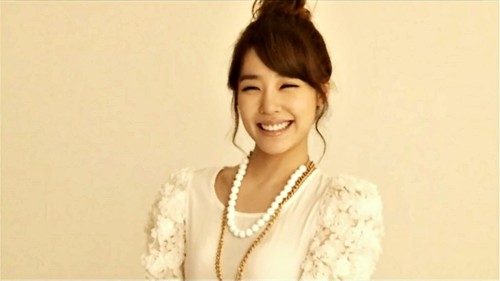 Yet, is Tiffany only the sum total of her physical attributes and nothing else ? Heaven forbid, no ! The beauty that is Tiffany Hwang is but the “tip of the iceberg”, for within her being lies a powerhouse of varying talents.

From the start of her idol career with Girls’ Generation (SNSD), Tiffany’s “hidden” talents were evident to the powers-that-be in SM Entertainment. Chosen to form one of the very first “sub-unit” of Soshi (the other chosen members being Jessica and Seohyun), Tiffany had a pivotal part in the promotion of 2 songs specially written for this sub-group: Oppa Nappa and Fantastic. In fact, for the latter song, Tiffany also had a starring role in the song’s music video, a prelude of things to come when she starred in the Korean stage version of the “Fame” musical later on in her entertainment career. 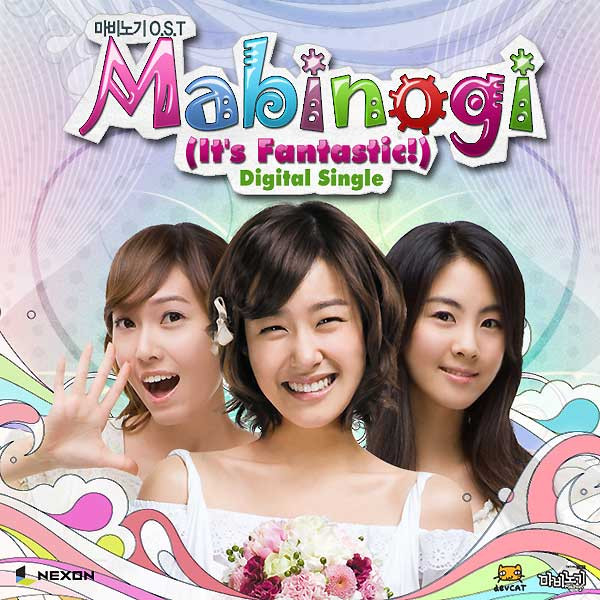 Fast forward a couple of years and Tiffany is once again chosen to be part of another Soshi sub-unit, this time together with her best friend Taeyeon, and, of course, our definitive and loveable maknae, Seohyun. Going by the stage appellation TaeTiSeo, the 3 beautiful ladies made extremely popular their sub-unit “debut” song “Twinkle“, garnering an unprecedented Triple Crown win in all the major music shows on Korean television whilst they were on their month-long musical promotion then. 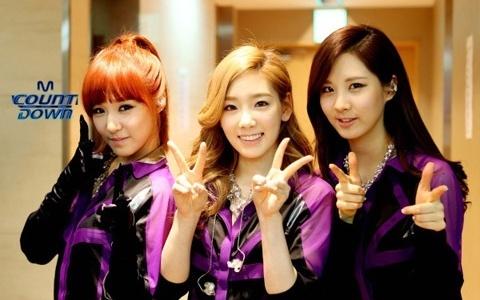 On her own, Tiffany has slowly, but surely progressed from being just a member of SNSD to being recognized as a singer in her own right. Starting with her first OST track ( “I’m Alone” (나 혼자서) from the OST “Princess Ja Myung”), she went on to sing 2 more OST tunes (“Banji” (반지) from the OST “Haru” and “Because It’s You” (그대니까요) from the OST “Love Rain”), all 3 tunes garnering positive comments from fans and critics alike; her distinctive sultry, husky voice adding to the songs’ appeal ;). 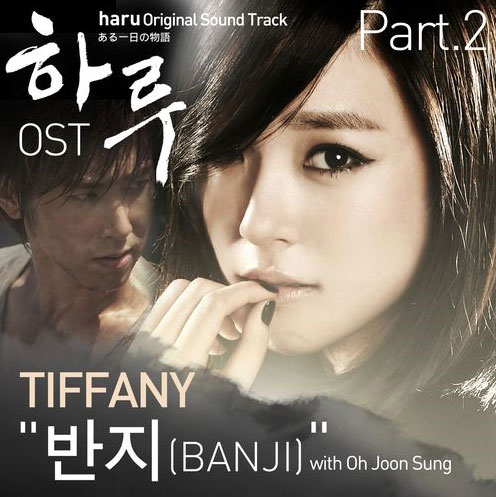 Next up, Tiffany the musical stage actress. Once quoted as being jealous of fellow Soshi member Jessica for being given the opportunity to headline the Korean version of the “Legally Blonde” stage musical, her chance to showcase her talents finally arrived when she was cast in the role of Carmen Diaz for the Korean stage musical of “Fame” in late 2011 to early 2012. Not one to disappoint, she gave her 150% effort to the role, juggling rehearsals in-between her other schedules with Soshi, various magazine photoshoots and even a full Girls’ Generation Asian concert tour during that period. The result: a stunning performance that brought the house down each night that she was on-stage (notwithstanding, of course, the “controversial” kissing scenes she had to perform with another cast member, Trax’s Jungmo, as part of the show ;)), proving, once again, the multi-talented persona that is Tiffany Hwang. 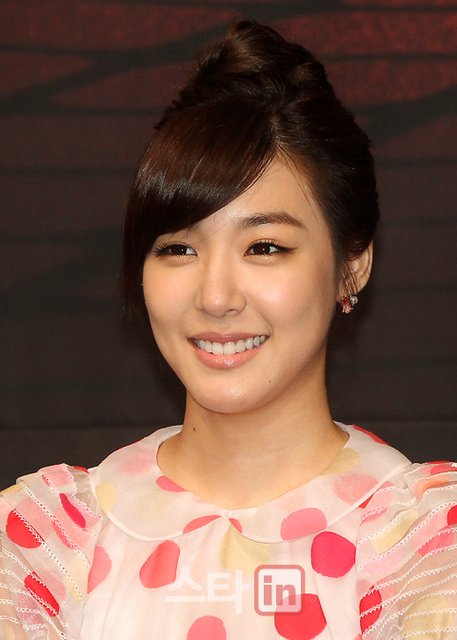 Stage presence aside, Tiffany was also selected to represent SM Entertainment at the SMTown Live Publishers and Writers Conference in Paris, where she very ably gave a full English presentation on SM Entertainment’s training programme for trainees, to the international audience present. Beauty and brains, what a “lethal combination”, don’t you agree 😆 ?!! 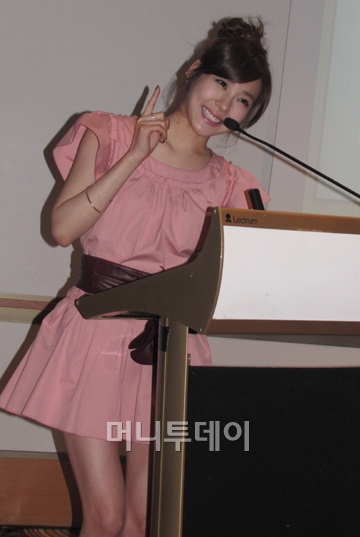 Yet, outside of the entertainment arena, the young lady that is Hwang Mi-young has many, many admirable qualities that are worthy of emulation. Who can forget how she so kindly treated an “anti-fan” when the latter had a minor “accident” outside of the SM building, turning her no doubt into a firm Fanytastic after that incident; or how she graciously helped two Thai fans with booking their manicure treatments (whom she happened to meet in the Korean manicure boutique when she went to do her own nails) despite the fact that she herself was in a hurry preparing to attend another scheduled appointment. For such commendable behavior, she truly deserves being given the moniker of “earthly angel”. 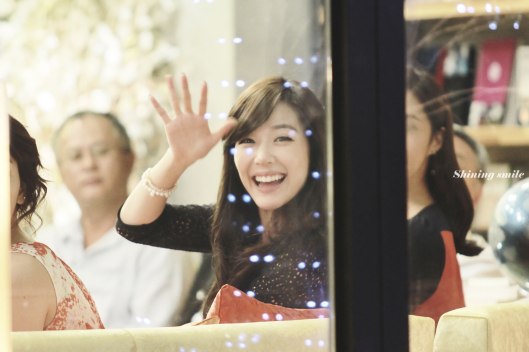 Besides treating her fans well, regardless of where she meets them, Tiffany is also a wonderful friend and colleague to both her fellow Soshi sisters and the other SM artistes (seniors, as well as, juniors). She frequently takes on the unofficial role of “manager” to the rest of the ladies whilst the group is on overseas performances, especially if the medium of communication at the country that they are currently at is English (most of the Soshi ladies not being very fluent in it), acting as an interpreter and “buffer” between the ladies and the English-speaking hosts. 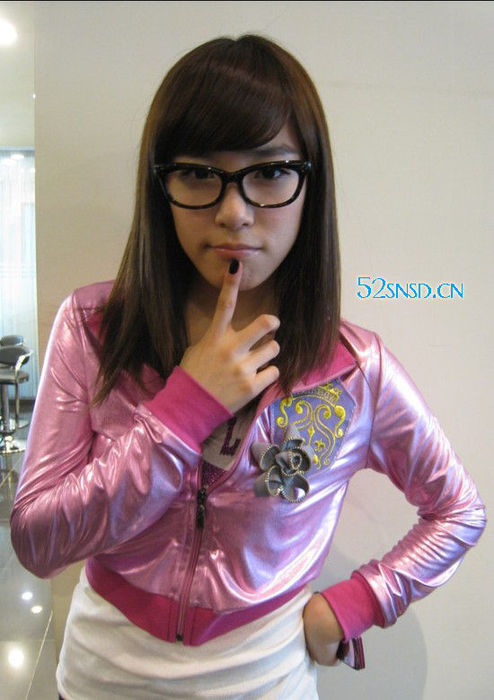 A recent example of such an action by Tiffany was after the recent SMTown 2011 concert at Madison Square Garden in New York, just as the Girls were at the airport preparing to leave the States for home. According to a fan account by one of the immigration officers on duty then (who happened, by chance, to be a SONE too), a couple of the ladies actually encountered some minor administrative problems with the immigration staff present. In a flash, Tiffany was on the scene, questioning the duty immigration officers present on the supposed problem, whilst protectively shielding the affected members from further scrutiny at the scene. Such behaviour is highly commendable indeed and deserves the highest of praise. Tiffany jjang !

Aside from that, Tiffany is also a firm believer in cheering on her fellow Soshi members in their individual endeavours, giving them full support whenever time, and schedules, permit. As a recent example, just witness the fervent support given by Tiffany to Hyoyeon as she participated in the gruelling contest that is “Dancing With The Stars 2”. Now that’s what I call “a friend in need, is a friend in deed” :). 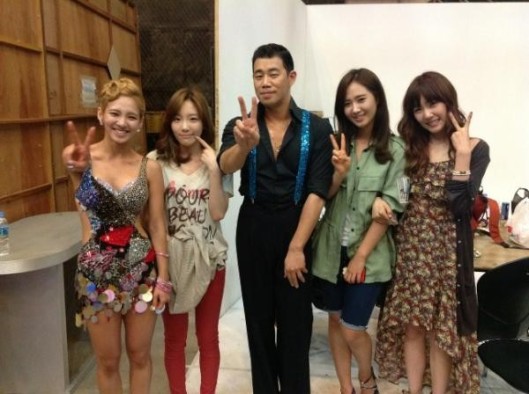 To top it all, our dear Tiffany never fails to display the Agape love that is inherent in her nature and by virtue of the fact that she is a fervent follower of Christ, ever willing to lent a comforting shoulder to or give a cheerful eye-smile for whichever member of Soshi (or anyone else, for that matter, SONE or not) who needs it at the moment. Such caring behaviour is indeed hard to find nowadays in this cold and somewhat harsh environment that is the entertainment scene ;). 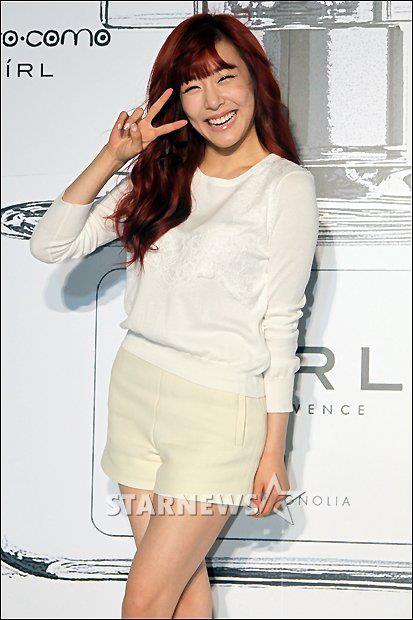 So, there you have it, a nutshell recap (so far) of the life of an extraordinary young lady that is Tiffany Hwang Mi-young; a truly amazing “twinkling star” in the “Soshi universe”. 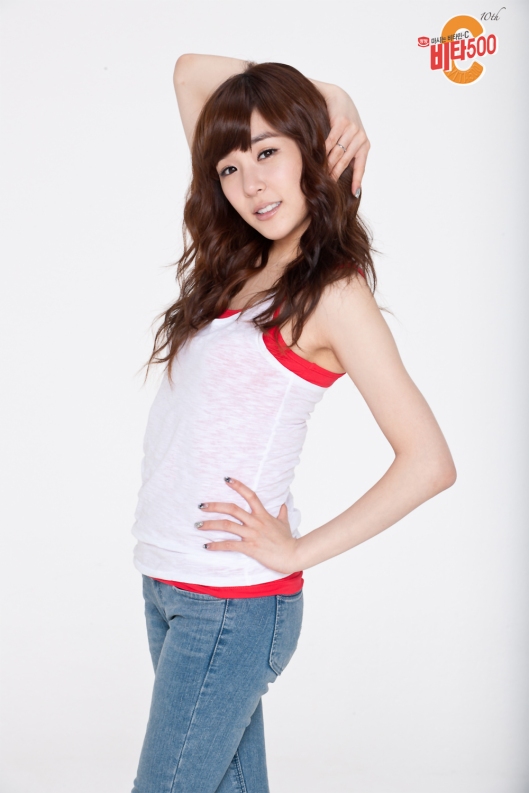 What next then for our talented young lady ? Well, in a recently televised interview during a Korean musical entertainment programme (KBS Joy Lee Sora’s Second Proposal – Episode 54), she expressed a keen interest to try out acting, an area in which she has yet to venture into, if given the opportunity to do so. Knowing her, I am pretty sure that she will make a great impact on the acting scene too should that come to pass.

A particular scene in the recently released movie “I Am” caught my eye and I thought it pretty appropriate to end this particular discourse with it. It was the part where all the SM artistes gathered to celebrate the birthday of BoA at SM Headquarters. In it, a very young (and very nervous, I might add ;)) Tiffany was asked by her idol BoA what she wanted most to achieve in the future. Very shyly, she mumbled a quick reply that she would like to achieve the same level of success as BoA herself in her own career in the K-Pop entertainment industry. Well, fast forward to the present, I am sure that everyone will agree with me that she has done pretty well for herself in achieving that aim so far :). 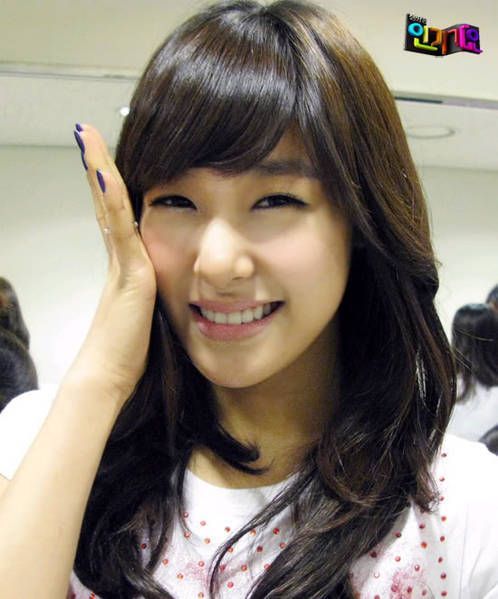 So, to our young, talented and extremely beautiful Tiffany Hwang Mi-young, here’s wishing you a Blessed and Wonderful 23rd (24th in Korean years ;)) Birthday ! May the Love of Our Heavenly Father keep you always and give you every success in your life and its many endeavours. Tiffany Daebak 😀 ! 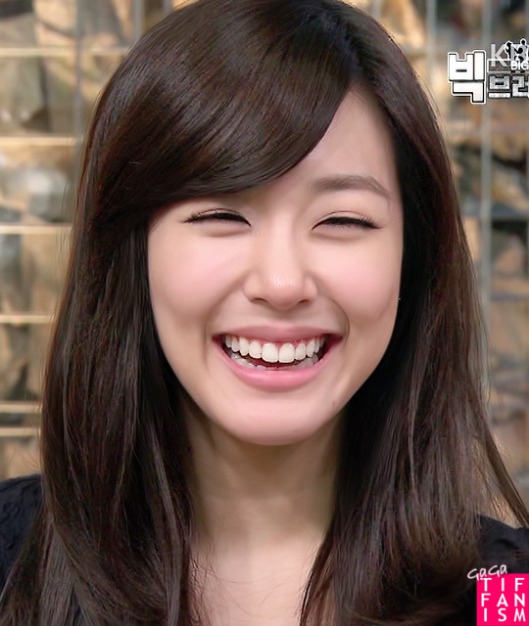 75 thoughts on “Tiffany Hwang Mi-young, The Twinkle In The Earthly Universe That Is Soshi”