its all wins this week for snsd woooo

SeoHyun, Yoona and Yuri were chosen by the netizens as first, second and third places for ‘cosmetic-models-who-do-not-need-cosmetics-because-their-bare-faces-are-prettier’ and proved that it is indeed SNSD’s era.

On the community portal site, DC Inside, a survey titled ‘Who are the cosmetic models who do not need cosmetics because their bare faces are prettier?’ took place from June 19th to 26th. In this survey, YoonA placed first, SeoHyun second and Yuri third. 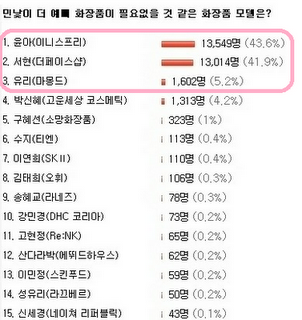 YoonA, who got 13,549 votes out of 31,076 votes (43.6%), have been Innisfree’s model since 2009 and came to be known as ‘Skin Beauty’. Yoona’s unique bright and pure image matches very well with the brand and her clean and bright skin expresses the brand’s concept very well.

SeoHyun, who received 13,014 votes (41.9%), became widely loved as the face of The Face Shop since 2011. She was praised that her pure and intelligent image suits the brand very well. She also sang the theme song for The Face Shop and is working ardently as their model.

Yuri, who received 1,602 votes (5.2%), started working as a model for Mamonde since this March. Yuri, who was chosen to be Mamonde’s model due to her outstanding talents as well as her friendly image, is known to have been using Mamonde’s product for a long time.

These three were followed by actresses Park ShinHye and Koo HyeSun as well as Miss A’s Suzy.