As you all know, June 28th is Seohyun’s Birthday! But its even more special because Seohyun hosted a sensible…..party? SMTown artists including SNSD, SuJu, f(x), TVXQ and Jinwoon all celebrated her birthday!

Revealed by SuJu’s Eunhyuk and Leeteuk, check out their…. as i would imagine, awkward party!

Eunhyuk: Yesterday evening…”Katalk*!!”
Seohyun: “Oppa, what are you doing tomorrow night??”
Me: “What’s up~?”
Seohyun: “I’m inviting close friends to have a birthday party!!^^”
Me: “Then why are you calling me…”
Anyway, I went tonight to congratulate her. Unlike what I expected, I was the first to arrive.
Us drinking juice… Stifling awkwardness.

Eunhyuk: Heenim and Sooyoung arrived!! Now it’s better. But where are Seohyun’s friends…

Eunhyuk: About an hour after the planned time, Seohyun’s real friends, Jinwoon and Amber finally appeared!! Seohyun, is the picture you were expecting starting to form? 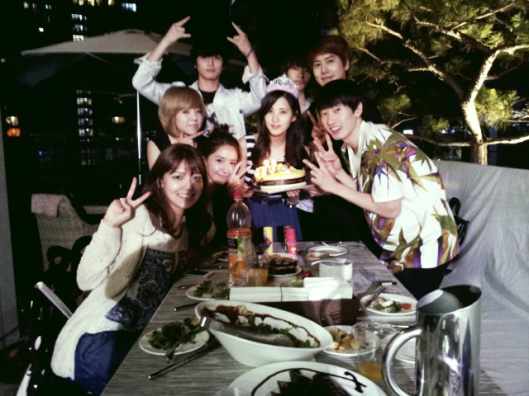 Eunhyuk: Yoona, Sunny appeared with the cake!!!! In the end, it’s Suju & Soshi & JYP’s Jinwoonㅋㅋㅋ Then I left. I heard Leeteuk, Changmin came after I left. Anyway, happy birthday, Seohyun^^

“Leeteuk: Angel maknae princess Seohyun!! Happy birthday!! Yesterday, you suddenly invited me for a party~^^ It surprised me ㅋㅋ It was short, but it’s been a while since we’ve done something like this~ Eunhyuk came first and left first~ Anyway, happy birthday!!!”