bet she will put the money in her savings account or something sensible haha as expected! 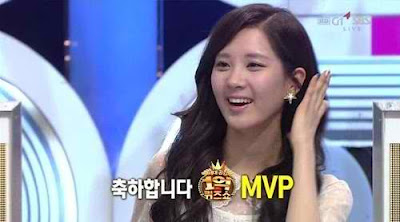 On the latest episode of SBS’ ‘100 Million Quiz Show‘ which was airred on May 18th, Sensible Seohyun as a guest star, showed her amazing knowledge. She is known to enjoy reading so much that she even carries a book everywhere, in which with this knowledge she is able to calmly answer each question that was fired at her… And to gain that extra pro-ness, she even adds explanations to each of her answers! To this, its no surprise that she became the first ever guest on the show to get a perfect score!!

As Seohyun made it to the the final round of the show, where 40 million won (about $34,240 USD) and a car were on the line, in a response to the final question, “What determines the color of an egg shell?”, Seohyun like a BOSS replied correctly, “It depends on the color of the hen.”

After becoming the first person in the history of the show to receive a perfect score, MC Kim Yongman couldn’t hide his surprise, commenting, “This has never happened before.” Viewers and fans alike responded, “What can’t she do?” and “She dances and sings well, she’s pretty and she’s even smart.”

Easy monies and car Seohyun! Congratz!~ Another mark in History!