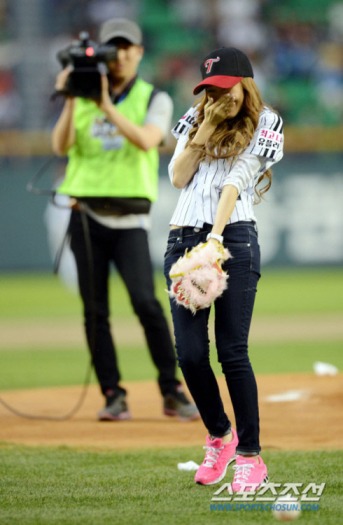 Girls’ Generation Jessica appears on North American Television, but not in the way you might expect.

A couple of days ago, FunkyFlapJacks posted about Jessica’s opening day pitch (if that’s what you would call it) at the Samsung Lions and LG Twins Professional Korean Baseball match. Of course the fancams and source video went viral, with popular sports blogs creating posts about one of the most embarrassingly cute commemorative first pitches in baseball history. She even got mentioned on popular internet new sites like the Huffington Post, and NBC Sports.

ESPN’s Pardon the Interruption couldn’t help but pick up the story and throw it in on their “Happy Birthday Segment”, where they wished Jessica a belated Happy Birthday. They also mentioned Girls’ Generation as a Very Hot Korean Girl Group, and talked about her impeccable delivery to the plate, with a follow-up that only Jessica could provide. Baseball fans have already dubbed this as one of the worst first pitches of all time.

Not exactly the way one might expect Girls’ Generation to appear on North American television, but certainly a pleasant surprise.

Video of Jessica’s athleticism: (Creds to MAEniac for sending the link)

6 thoughts on “Jessica on Pardon The Interruption”