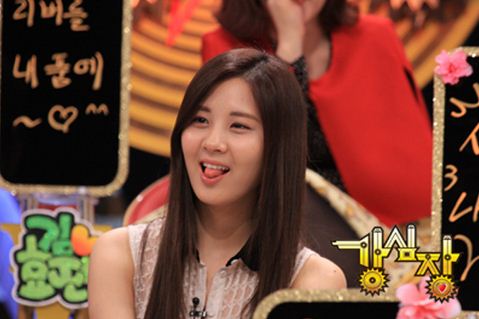 About “Le Grand Journal,” she said, “In France, when we were behind the curtain and about to go up to the stage, we heard no cheering sound outside, we thought, “Ah there so aren’t many fans.. so let’s just enjoy ourselves..”, but the moment the curtain opened, the cheering was very loud, we were really surprised”. She continued, “The studio was really small and audiences were near us, there was a fan who called my name “Seohyun Seohyun!” right in front of my nose, it was really near.”  *Then demonstrated how close it was*

She then continued about their appearance on “Late Show with David Letterman,” “In the US, we thought that we would be unable to perform. The show we attended had a really narrow stage, in fact there was no singer who actually performed during the show. There was not enough space for 9 of us to stand, we were worried. Furthermore, we were supposed to perform a remixed version, since it was a concern that the original version doesn’t suit the taste of the US fans. But the remixed version has no beat at all. Normally, we need beats to keep us in sync, so it was a challenge for us. But we just worked hard and were finally able to accomplish it.”

Check out the pictures and cut below, sorry, no English subs as of yet! 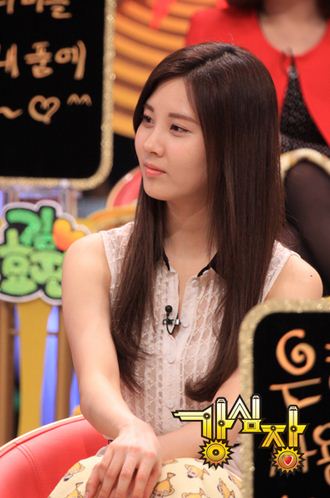 12 thoughts on “Seohyun on Strong Heart”