It’s been awhile since we all smiled silly watching cuts of Taeng DJ’s dorkiness during MBC Chinhan Chingu radio show; be it her laugh, hugging her trom bear gift, or simply >>making honest comments<<. For those who feel the deprivation (which I am sure we all are), silis7noy2 gave us a simple rundown of the memorable quotes she said. Can think of any? Comments below please 😀

“And it’s really weird, you know the fried eggs? Ah I mean rolled eggs(like omelette)! My tooth popped out while eating rolled eggs. I don’t know how that happened. Mystery mystery~” [100119]

“When I bought the bed that time a wrong one was delivered. So this large king size came. Oh my I was to buy the single size. And I had to return it so I shouldn’t sleep on it. So I just left it there and it took up the room and I couldn’t use it. I had to stay out and wander around for few days.”[091029]

“You know the spray for your hair? Sometimes I spray that on my face. Really. When you’re lost in thought and try to do many things at once that’s what happens. The staff unnie asked me if I was trying to make my skin taut. Yeah, I’m trying to go nuts here.” [100405]

On Taeyeon’s birthday
“I prepared little presents for my parents. As I became 22 years old my parents are also getting older. So I got some functional cosmetics for them to maintain supple skin and they really loved it. Also for my dad who likes to golf, I got some golf balls. As I was handing them the presents I told them “Thank you for bring me to this world” and I was about to tear up. Uhhh I’m so silly. So next time I think I’ll do it more secretly. I get bashful doing it in front of them. Next time I’ll put it in their car or something. Dear mom and dad thank you for bringing me to this world.”[100309]

“The first concert ever that I went was Shin Seunghoon’s concert when I was little. Mom took me holding my hands. He does lots of concerts, Shin Seunghoon sunbaenim. I was little I didn’t know what’s what but I still jumped up and down with everyone.”[100117]
(Shin Seunghoon being perhaps the biggest kpop male ballad artist of all time, little Taeyeon would have never guessed that when she grows up she will be welcoming Shin Seunghoon as her guest on her own radio show one day, and Shin would adore the little DJ. Shin also invited Seohyun to Open Concert for the duet Falling Slowly)

“I touched a beehive by mistake I was with my brother we opened up a wooden crate and there was a big beehive in there. And both of us at the same time we were attacked we jumped up like 50 times. Not just few but so many bees. We got stung so much, behind our necks here there, our fingers, we got stung at once.”[100223]

From Jang Jaehyuk’s interview who directed the Korean Tell Me Your Wish MV
“Because the 9 members each had distinct charms and personalities it was clear what kind of feel each member’s solo scenes had to show. This was a project where it was more important to show the girls’ visual charms rather than worrying about the story of the MV.”
“No doubt about their performance, but what was more impressive was SNSD’s attitudes. Other artists I have worked with them for long time but for SNSD when I first met them they were already top stars. And I worried that they might not hide the vagaries of their moods at the set and make the shooting difficult. But instead they were so courteous and innocently cheerful.”

A writer for MBC WGM wrote on her Cyworld page:
“I love Seohyun. I’m a female and why do I like Seohyun more than even Yonghwa?”

The producer of Legally Blonde was looking for actresses to cast in his play and one day he met Lee Sooman and suggested to Lee, “How about letting Jessica play Elle Woods?” and Lee responded “I was thinking of the same thing.” and the deal was sealed. (Sica still had to go through an audition though, to prove her skills and of course she passed)

From the S-OIL company newsmail distributed to employees:
[ This is ### from the marketing department.
Through the affiliated cable channels and theater chains you may ####
* The S5 promotion on 5th, 15th ####
* S-OIL CF for Bong will have the captions changed to ####
* S-OIL’s main models is the Goddess! She is SNSD Yoona. *^^*]

November 2008 was bit gloomy for Sones, people fretting that SNSD being away from kpop for too long and with rumors of the new album having problems… The girls must have been fretting too, as revealed by Taeyeon on Chin Chin, but of course they would be working on a recording… that would become history few months later. At any rate there were some free time available and the girls would tend to their private lives

A dinner account from Nov 2008
“… When Hyoyeon was little she got dance training at Winners and my friend DS was her dance trainer. And today he was meeting Hyoyeon and I tagged along. Ah~ it’s wondrous meeting a celebrity but not only that we had dinner and some tea together!! Can’t believe it was real it’s too fascinating!! Aren’t you jealous!?
Hyoyeon now she is a super star..!!! In real person she had small face and slender body so pretty!! I had this idea that celebrities could be difficult but her personality was so really nice!! In fact I was awkward and bashful but she was relaxed she looked after me.. what a beautiful fairy.” 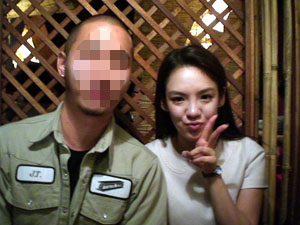 Then one year later in October 2009 the girls were in Japan. The girls were unknown in Japan at the time but a Korean fan witnessed them in Tokyo.
“…Saw SNSD in Shibuya today at the 4way stoplight… Totally slim bods!! All the members seemed very intimate with each other~ Seohyun seemed really excited and Sooyoung was holding a travel guide, telling others “It says that place over there is famous~”… Later the girls were witnessed at a ramen shop… None of the girls would know about the fate that would bring them back to Japan one year later, under a totally different light

Back in Korea a Nov 2009 witness account
“I saw SNSD at the hospital they were getting checkups
Oh my they were falling asleep standing up…
First time I saw people sleeping standing up..”

From Phuket filming crew
“The pranksters are playing with fireworks now, wearing sunglasses at night.. Everytime I watch them playing on their own I get frustrated that I cannot film their true selves like this! We are watching a real random comedy show in Phuket”
“Having been wildly playful the girls now collect the ashes from the fireworks and spell out the name of their group and get together and ask me to take their picture, they have the heart of real sonyuhs… Holding their hands together and murmuring something together…”

According to witness at the driving center Seohyun still drives a bit wiggly but she knows how to shift gears well.

AKB48 had a festival yesterday and some members did a cover of Genie.

How precious are those bits and accounts? ❤ lol Lee Soo Man and Legally Blonde PD-nim hivemind! Didn’t Onew refer Jessica to him as well? Taeyeon being stung by bees LOL. But her skin is as flawless as flawless can be, regardless. And can you imagine missing-tooth Taeyeon? Now we know what rolled eggs do to Taengoo 🙂 And lastly, it’s sweet to see Japanese girl groups fangirling over soshi 🙂 Talk about girl group love ❤