Sooyoung, along with her co-stars Kim Minjung, Oh Jiho, and Kim Seungwoo from her upcoming drama, ‘The 3rd Hospital’, were featured in the September issue of ‘Singles’ Magazine. The cast took part in a photoshoot as well as a fun interview that showed their playful and comfortable relationship with each other. The first episode of ‘The 3rd Hospital’ will air on September 5th at 11PM KST on tvN.

I heard Girls’ Generation’s Yuri and Sooyoung held a birthday party for Kim Minjung. I assume you would have been jealous that she has a fixed member, while the job of actors is a lonely one, always having to move alone.

Kim Minjung: That’s right. Because Girls’ Generation members are close, they visited the set often. It was interesting, and I was jealous thinking about how they could give each other strength.

There are a lot of members who have doubled as actresses, do they give you acting advice, too?

Oh Jiho: Sooyoung is the best at acting.

Now that I think about it, I’ve seen Sooyoung at a theater. If it’s to the point where you go to watch musicals alone, I thought that you were fairly serious about acting. But I learned that your sister is a musical actress?

Kim Seungwoo: Her sister will be making an appearance in the drama, too. She was good at acting. I heard she was in a musical recently, but I didn’t get to see it.

Sooyoung: After the work called ‘King Sejong’ is over, she will be starting ‘Looking For Kim Jongwook’, so come watch that. It’s something that my sister has really been wanting to do for a while.

Kim Seungwoo: Wow. ‘Looking For Kim Jongwook’? Isn’t that a gateway-like musical for stars? Your sister is popular.

Honestly, based on just looks, it would be right for Oh Jiho to do Western medicine, and for Kim Seungwoo to do oriental medicine. (laugh)

Kim Seungwoo: We should have done that. Haha. Because he has a more Western look. He’s Agrippa. It’s hard not being greasy while being this good-looking. It’s Jiho’s strength.

Oh Jiho: I worked under a company in 1998. Someone said I looked greasy as soon as they saw my profile picture.

Oh Jiho: You do that now, too.

Kim Seungwoo: I’m saying I’ve been doing this for that long. [Translator’s note: implying the taxes part was a joke]

Kim Seungwoo: It’s not acting conceited, but being a distinguished person. (laugh)

All the main characters are doctors and only Sooyoung is a musician. Did you not have any sense of alienation? The situation was like being the only ordinary person while everyone was in their superhero costume in the ‘Avengers’.

Sooyoung: I was a little jealous of them wearing a doctor’s gown. I normally wanted to take on the role of a doctor, but I’m the youngest on the set, and I come on as a weak character. Also, being amongst people wearing doctor’s gowns makes me feel protected, so it’s nice.

Kim Minjung: Sooyoung actually stands out the most. 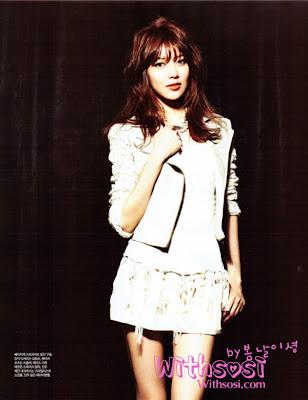 You’re a member that girls like the most out of Girls’ Generation. I thought you had a more laid-back image, but I heard you’re feminine and do a lot of aegyo, too? How did you adjust?

Sooyoung: I had a little trouble at the beginning. I’m shy and am the type where it takes a long time to get close. But my role in the drama is very bright and talking informally to people I meet for the first time. I think the insides are similar though.

Sooyoung: Oh, really? I will take that as you saying that I act well. (laugh)

Kim Seungwoo: I’m friends with Sooyoung on KakaoTalk, and she’s no joke at acting conceited. When I wrote, ‘You’re so pretty,’ on KakaoStory, she said, ‘Hmph. You’re just noticing? I’ve been pretty’. (laugh)

Oh Jiho: She should be like that. The generation where celebrities play innocent saying, ‘I’m not~’ has passed.

Sooyoung has a lot of overseas activities. Did you film the drama amidst all of that?

Sooyoung: There weren’t that many overseas schedules. The company was considerate in letting me focus on the drama aside from group activities. It’s a pre-production. The script was out early, and because there was time to spare, I was able to focus comfortably. When I saw my other members receiving pages of scripts like a live broadcast system [Translator’s note: receiving parts of the script close to the actual air date, rather than receiving the entire script at once like Sooyoung did] I thought, ‘I don’t think I could do it like that’. The members who were able to do it under those conditions are really great.

Kim Seungwoo: Don’t be surprised while watching our drama, [surprised at] Sooyoung acting so well.

Is she better than Yoona? She [Yoona] is the member who has become most situated as an actress.

Oh Jiho: From what I’ve seen, [Sooyoung] is better.

Kim Seungwoo: Everyone has their own style when it comes to singing or acting, so it’s not fair comparing them, but Sooyoung was really surprising. When I met Lee Sooman privately, I complimented her, saying she was really good, and he said, ‘Sooyoung always acted the best.’

You’re a good senior. Complimenting a co-worker in front of their boss is loyalty.

Kim Seungwoo: I don’t have a business relationship with Lee Sooman and am friends with him personally. I really wanted to meet him to talk about things like this because she’s so commendable. Because judging whether her acting is good or bad is up to the viewers, I’ll set that aside, but her posture on set was really good. She wasn’t like other idols these days. She was just trying to focus, but what does a kid know. (laugh) How cute would that be.

Oh Jiho: She told me that she’s trying to focus, so not to laugh.

Sooyoung: Oppas and unnies can laugh and immediately focus when filming starts, but I can’t because I’m a beginner. But they keep teasing me before filming. They kept making me laugh, so I was sad I couldn’t focus well that day.

Is the best action scene in this to the point where the two characters grab each other’s collars?

Sooyoung: No. It’s a scene where Oh Jiho oppa pulls medicinal herbs on a cliff. I thought he was filming a sports CF. (laugh)

What order were you all cast?

Kim Seungwoo: Sooyoung was the first. The main male role wasn’t decided on, so while the scenario was being sent around, Sooyoung was still the only one confirmed.

Sooyoung: The first time I received the script was around October of last year. With the cancellation of another work I was supposed to do, I came to do this. I told them I would be in it regardless of who the other actors would be. The scenario was really good. The drama was normally supposed to air before ‘Love Rain’ and ‘Fashion King’, but because the situation didn’t turn out as desired, I kept waiting.

Oh Jiho: The viewer ratings can jump 1% just because of you.

After hearing the other actors who were cast, what did you think?

Sooyoung: I’m a singer, so I worried more about what the others would think of me. I was really nervous, and I worried about whether I would cause trouble.

Kim Seungwoo: Because Sooyoung has a role that doesn’t act directly with me, I just thought, ‘She acts too now.’ Same with Minjung. We aren’t in the age group to be interested in one another. I just thought, because she’s someone who is good at acting, there wouldn’t be any hindrances. My concern was on who would be playing the role Jiho has. After hearing that the scenario was given to Jiho, I said, ‘Do you think he would do that?’ and I was told he immediately did. Who knew he was that free! (laugh)

Oh Jiho has played both manly, charismatic roles and slacking, clumsy roles, but I think an intelligent role is a first.

Sooyoung: He is normally clumsy. He has an unexpected appeal.

Oh Jiho: A doctor is a role that actors really want to play, because it’s also a dream boys have when they are little. It was a role I wanted to do as an actor, and because it’s a doctor in oriental medicine rather than one of Western medicine, I felt it suited me.

I heard you panicked during the first shoot, Sooyoung.

Sooyoung: It was difficult adjusting to the set and equipment. I went prepared, and it was a script that I saw for a long time, but because I was nervous, my acting came out forced. I panicked, thinking, ‘What’s wrong with me?’ But because they made me feel so comfortable, I adjusted quickly. I was taken care of a lot and teased a lot.

Which Girls’ Generation members have not visited the set yet?

Sooyoung: Hyoyeon, Jessica, and Sunny are the members who have not visited. I have three episodes left. Haha. But the other members bought vitamins and cupcakes, so I was really thankful. 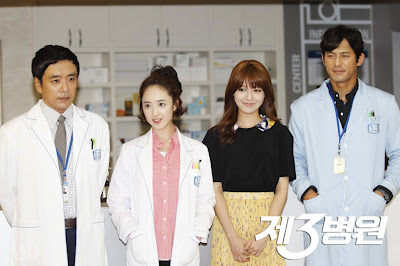 “Something that other medical dramas don’t have? Girls’ Generation.” That’s Kim Seungwoo and Oh Jiho’s joke. Kim Seungwoo, with a serious face, said that Sooyoung’s acting was better than expected. He also guaranteed that everyone would be surprised [by her acting]. While it has become the standard for a drama production crew to cast an idol for audience value, there aren’t a lot of idols who expect to build their presence amidst a crowd of middle-aged actors. With her sister being a musical actress, she has earnest affection for acting, like her singing.

Before making her name known as Girls’ Generation, she already debuted through the film ‘Hello, Schoolgirl’, so that dream didn’t ripen in just a day or two. While it looks like her official acting started later than her colleagues, ‘The 3rd Hospital’ is a drama that was being prepared before other Girls’ Generation members’ dramas, such as ‘Love Rain’ and ‘Fashion King‘.

In this drama, she acts as the loveable violist, Euijin, who whole-heartedly follows Oh Jiho’s character, Seunghyun, around. This role of Euijin, who has a lot of aegyo, was unfamiliar at first to Sooyoung, who says she usually is really shy. “It was hard adjusting because I was acting for the first time in a while.” However, she was able to begin finding her place as a member on set through the other actors’ affectionate teasing. “What does this kid know to say she’s focusing… Haha.” Kim Seungwoo explained what happened on set, implying she’s cute. Oh Jiho added, “She told me not to interrupt her because she has to focus.” Sooyoung reacted as if she were already used to their jokes.

Sooyoung contributed in increasing the power of the set in ways other than acting. Girls’ Generation members’ encouraging visits on set boosted the actors and male staff members morales greatly. They also held a surprise party for Kim Minjung, who had her birthday during the drama shoot. While she is an icon that the entire world already focuses on, as an actress, she is a rookie and the youngest member on set. Sooyoung accepted that position cheerfully. The reason why she does not look lonely or nervous at all starting over as ‘rookie actress Choi Sooyoung‘ and not ‘Girls’ Generation’s Sooyoung‘, is because of that.